When I showed up to the Jolly Jaunt 5K at the Boston Common in 2011, I stood out like a sore thumb because I was decked out in a pink beanie in a sea of red and green. I didn’t really learn my lesson in 2012. The pink beanie is long gone (I can’t seem to find it. Sniff), but I arrived in my usual slightly absurd winter running outfit with nary a festive hue on me. Oops. Sore thumb alert.

Red and green was nowhere to be seen on my person (trust me).

More troublingly, I also showed up incredibly late, thanks to some uncharacteristic misreading of the MBTA Trip Planner. If Hubby hadn’t been away Guarding, it’s unlikely this lateness would have occurred. Firstly, we would have been driving rather than public transiting, and secondly, we would have been there 90 minutes before—because Hubby refuses to turn up to a run any later than that. I mock him for it mercilessly (we spend large chunks of time waiting/napping in the car having woken up at 5.30am), but we never, ever have to line up.

I recognized the prudence in his approach when I was standing in a 30-deep line of people to get my bib 20 minutes before the start of the run while crazed volunteers ran around trying to locate bibs and T-shirts. It’s probably a commonplace fiasco at a large event such as this; I’ve just never experienced it. (Because I picked up my bib in a previous geologic age.)

END_OF_DOCUMENT_TOKEN_TO_BE_REPLACED

I’m feeling a little green this week, which is fitting given that I’m in the midst of running the Irish-themed Wild Rover Series. A new job has my mind occupied and my butt attached to the nearest soft surface. The gym is a distant memory. And though my 52 Weeks, 52 Runs schedule is on track, my attention and enthusiasm have been diverted while I find my footing at the new gig.

So, of course, I’m completely prepared to run four miles this coming weekend and five the weekend after … 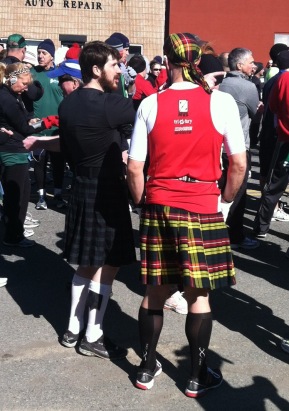 Who needs shorts when you can run in kilts!

The first Wild Rover installment was last weekend’s Frozen Shamrock 3-Mile Run. (That’s right, a three-miler! I didn’t even have to run that extra 0.1, which must be what brings me undone on a typical 5K. Right?)

Sponsored as it was by an ale house, there was obviously going to be beer – clearly a draw for me. (I love how beer and running have become inextricably linked in my world.)

There was also some superior neck bling, in the form of a medal with three parts that come together to form a lucky charm (you get one bit every race). Many of you know how I feel about medals that don’t double as wine stoppers, but I admit that this triple-shiny is pretty cool.

Anyway, on to the run (sometimes I forget that’s the point!). I started out at a blistering pace ( in my mind, anyway), and was breezing along for the first half mile. Which probably had more to do with the strong tailwind than any newly acquired skills on my part.

The blistering stopped when I encountered hilly nemesis No. 1, but I took the incline at a good clip, reaching the first mile marker at 11.32 (I love races with timing clocks at each mile), which was about 11.16 if you factored in the gun time. (Yes, I speak like this now.) I was on fire! OK, more like on smoulder. On fire would have been sub-11, but still …

END_OF_DOCUMENT_TOKEN_TO_BE_REPLACED

I grew up in Sydney’s western suburbs, an hour’s drive from the nearest beach, so I didn’t get many chances to channel my inner bronzed Aussie. I hated getting sand in all the wrong places, couldn’t surf, and was scared of the waves after I got too big for my dad’s shoulders. The only time I ever ran (i.e., stumbled ineffectually) was when I needed food and had to traverse lava-hot sand in order to get it. Needless to say, I was an inelegant beach-goer.

I adore the beach now – but not much has changed, it would seem. 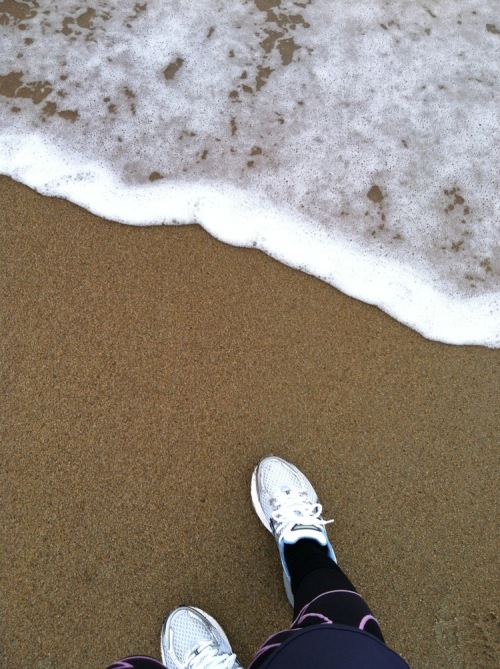 Me vs. the water at the Frosty Knuckle 5K in Salisbury, MA.

As part of my 52 Weeks, 52 Runs challenge, Hubby and I signed up for the Frosty Knuckle 5K at Salisbury Beach, MA (actually, it was a 3.5-miler, but 5K sounded snappier). I was excited about this road/beach run as I figured it would make for a fun change from all the dullsville paved surfaces. Also, there are no hills down by the water! Or so I thought …

END_OF_DOCUMENT_TOKEN_TO_BE_REPLACED

A diabolical duo of DIY runs these past two weeks proved what I already knew: unless there’s T-shirts, assorted malty beverages, and a crowd to propel me forward (fear of shame is a great motivator), I’m an epic failure as a runner. So I was excited to get back to my regularly scheduled 52 Weeks, 52 Runs programming by suiting up for the Super Sunday 5 in Cambridge, MA. I figured at the very least, the race would erase from my mind the ignominy of the great treadmill and wind debacles of 2012. 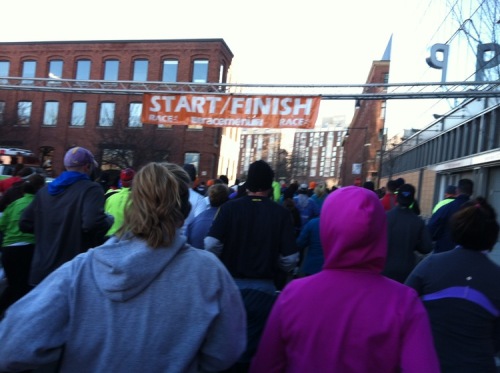 And we're off. The slightly blurry start (for all) and finish (for most).

In addition to its shame-eradicating properties, Sunday’s event promised beer and general Super Bowl Day merriment (with music courtesy of BearFight, “Boston’s premier hard-rock party band”). Also, it benefited Target Cancer, Cycle Kids, East Cambridge Little League, Broad Institute, and LIVESTRONG. Reasons enough to come out in the cold. But what really sealed the deal for me was the presence of the famed Boston party bus The Bustonian.

Hmmm, which to choose?

The race was ostensibly a five-miler, but organizers wisely figured that some people (i.e., me) might want to ditch after 3.1, so the rockin’ bus was there – complete with festive lighting and party music – to transport us back to the start.

Can I have The Bustonian on standby every time I do a race? It’s the dream!

I was a bit sad that I didn’t just get to ride the bus with a cold one (beer, not vampire) for the duration of the 5K, but I guess this 52 Weeks, 52 Runs challenge requires me to, you know, run …

END_OF_DOCUMENT_TOKEN_TO_BE_REPLACED

I have discovered something worse than hills. And treadmills.

There was a dearth of organized runs this past weekend, but I am committed to my 52 Weeks, 52 Runs plan. Rather than take to the treadmill again (savvy readers will recall how well that turned out), I decided to invoke yet another made-up rule:

4. If I’m traveling and no runs exist, and I don’t have a gym to go to, I can as a last resort huff and puff on my own.

Sure, I’m not traveling, and I certainly have a gym, but it’s my challenge and I can bend the rules if I want to. So Hubby and I decreed that we’d huff and puff on our own. Specifically, we decided to run/walk the Quincy Half Marathon route (he’s running this race for real in March) and donate $25 to the American Cancer Society Daffodil Days program.

I was down with this plan, although at one point I said to my running buddy: “You do realize this is going to take HOURS!”