A bump in the road … 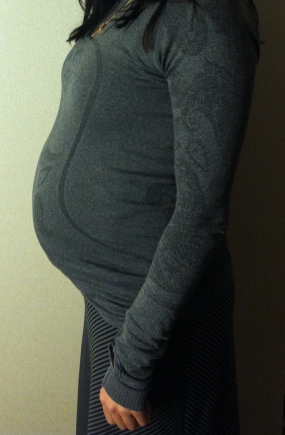 This is what happens when you stop running …

OK, perhaps not. But it sure does look that way.

Savvy readers may have noticed that there hasn’t been much striding on Stride & Joy lately. I have found that running for two isn’t nearly as easy (or fun) as eating for two. (I don’t like feeling as though my insides are about to fall out every time my foot hits gravel.)

Since entering this state of stomach expansion and new-found wobbly bits, I have done a couple half-marathons and a handful of smaller races, so at least I feel like I gave the whole running-while-preggers thing the old college try. (Although, given that what I normally do barely constitutes running, I’m not sure how to qualify what I was doing on my knocked-up races. But, hey, I always crossed the finish line.)

For the past couple of months, it’s been couch city for the most part, although I have been working out on Hubby’s new Elliptigo, which we turned into a stationary trainer (more on that later). I was swimming, but then our YMCA sprung a massive leak and ended up shuttered for three months. Perhaps it was a sign. I thought about yoga, and then thought about it some more. But by the time I get around to going to a class, this kid is going to be ready for higher education. I’m just not cut out to be bendy, especially not now, when putting on my shoes is about as unattainable as doing crane pose.

I fully intend to be back out there when I can (Stride & Bundle of Joy?), red-faced as ever, jogging stroller at the ready. Until then, happy 2014, everyone! May the road rise up to meet you.

This entry was posted in Humor, Running, Sports and tagged pregnancy running. Bookmark the permalink.