A diabolical duo of DIY runs these past two weeks proved what I already knew: unless there’s T-shirts, assorted malty beverages, and a crowd to propel me forward (fear of shame is a great motivator), I’m an epic failure as a runner. So I was excited to get back to my regularly scheduled 52 Weeks, 52 Runs programming by suiting up for the Super Sunday 5 in Cambridge, MA. I figured at the very least, the race would erase from my mind the ignominy of the great treadmill and wind debacles of 2012.

And we're off. The slightly blurry start (for all) and finish (for most).

In addition to its shame-eradicating properties, Sunday’s event promised beer and general Super Bowl Day merriment (with music courtesy of BearFight, “Boston’s premier hard-rock party band”). Also, it benefited Target Cancer, Cycle Kids, East Cambridge Little League, Broad Institute, and LIVESTRONG. Reasons enough to come out in the cold. But what really sealed the deal for me was the presence of the famed Boston party bus The Bustonian. 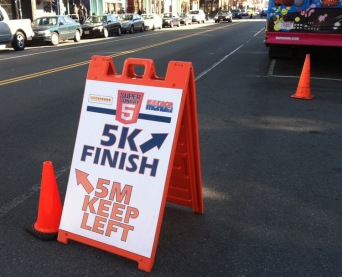 Hmmm, which to choose?

The race was ostensibly a five-miler, but organizers wisely figured that some people (i.e., me) might want to ditch after 3.1, so the rockin’ bus was there – complete with festive lighting and party music – to transport us back to the start.

Can I have The Bustonian on standby every time I do a race? It’s the dream!

I was a bit sad that I didn’t just get to ride the bus with a cold one (beer, not vampire) for the duration of the 5K, but I guess this 52 Weeks, 52 Runs challenge requires me to, you know, run …

There were two buses taking 5K runners back to the start. I got Mr Bustonian!

You would think the promise of a rockin’ party ride (I admit, I was irrationally excited about this) would have been enough to make me bust(onian) my ass to get to the finish. But no.

I’ve run in colder cold and encountered hillier hills. So there’s no reason this run should have been lousy. But I just I can’t seem to locate my willpower. Perhaps it’s off somewhere with my mojo doing shots. Wherever these scoundrels are, I’d appreciate a text. Their absence is starting to become conspicuous.

I wasn’t able to get through the first mile without slowing to a (fast) walk. I continued on in this run/walk fashion for the duration. I wouldn’t be so annoyed if I hadn’t previously proven my mettle by running an entire 5K. But suddenly my lungs have started acting out (I have never used my inhaler so often on a run). Perhaps I need to increase their allowance.

So much for shame eradication.

This combination of naughty lungs and missing willpower is alarming, especially as I have ahead of me a number of longer runs (and no party bus). I see my future, and it’s the treadmill …

(My level of suckitude notwithstanding, this was a fabulous event.)