When I showed up to the Jolly Jaunt 5K at the Boston Common in 2011, I stood out like a sore thumb because I was decked out in a pink beanie in a sea of red and green. I didn’t really learn my lesson in 2012. The pink beanie is long gone (I can’t seem to find it. Sniff), but I arrived in my usual slightly absurd winter running outfit with nary a festive hue on me. Oops. Sore thumb alert. 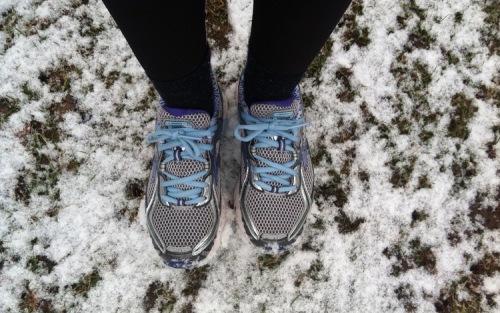 Red and green was nowhere to be seen on my person (trust me).

More troublingly, I also showed up incredibly late, thanks to some uncharacteristic misreading of the MBTA Trip Planner. If Hubby hadn’t been away Guarding, it’s unlikely this lateness would have occurred. Firstly, we would have been driving rather than public transiting, and secondly, we would have been there 90 minutes before—because Hubby refuses to turn up to a run any later than that. I mock him for it mercilessly (we spend large chunks of time waiting/napping in the car having woken up at 5.30am), but we never, ever have to line up.

I recognized the prudence in his approach when I was standing in a 30-deep line of people to get my bib 20 minutes before the start of the run while crazed volunteers ran around trying to locate bibs and T-shirts. It’s probably a commonplace fiasco at a large event such as this; I’ve just never experienced it. (Because I picked up my bib in a previous geologic age.) 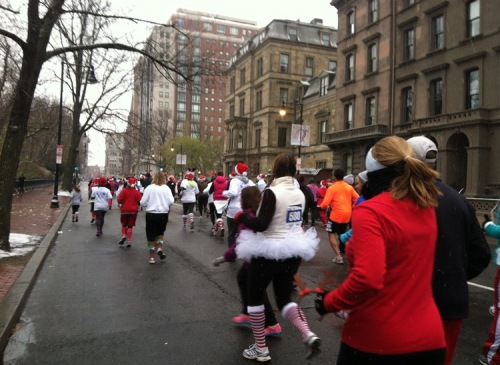 I hardly had time to pin my number on (with fingers so cold they were barely functioning) and throw my stuff into the bag check before the starting gun went off. (There was, however, something to be said for not standing still in the brutal cold for 20 minutes.)

This wasn’t an easy run, which was also the case last year. A threatening sky had become a flurry-storm. I really dislike running in the wet. I want the moisture on me to be coming from me, not from the sky. My lungs dislike rain and snow a lot, for some reason. I’m not sure how they can tell that it’s snowing, but they can. It was a nice flat course, but I wasn’t showing it the love it deserved.

There’s no award for coming 107th in your age group. 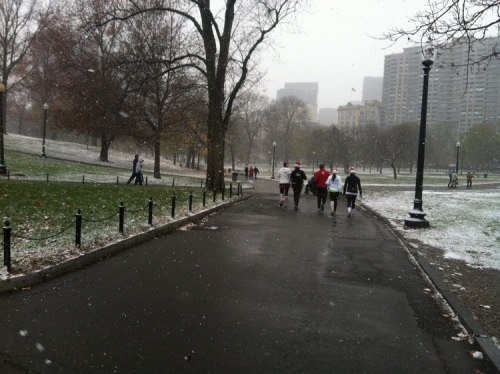 Snowy day for it.

I love participating in this event though, as it raises money for Special Olympics Massachusetts, an exceptional cause. And I like running along Commonwealth Avenue, which is as iconic Boston as it gets. I don’t get to spend much time in downtown Boston as I work across the river in Cambridge and spend my weekends gallivanting about in New Hampshire, so it’s always fun to be there.

My time was a couple minutes faster than last year’s effort, but I would expect nothing less given that a) I’ve been doing this for a while and b) I’ve been known to run at least three minutes quicker.

I would blame Boston’s mercurial public transit system for making me late and sending me into a pre-race tizz, or the Massachusetts National Guard for taking my driver away, but I guess that’s not fair. Nope, this one’s all on me. Or it’s the Spirit of Christmas telling me I should just wear some dang red and green next time. (I may have come to a similar conclusion last year.)