I never, ever, ever expected that my name would wind up on Cool Running under the title “5K Age Group Winners.” (I was third, by the way.)

OK, you can stop laughing now. (It took me about a week.)

The occasion of my dubious glory was the Wolf Hollow Half Marathon and 5K in Nashua, NH. This wasn’t a race I was particularly prepared for (although when has that ever been the case?). I had run the Feaster Five Thanksgiving Day 5-miler a few days before and that had pretty much done me in. (Note: It doesn’t take much to do me in.) Also, it was really freaking cold. Thankfully, we were allowed to take pre-run refuge inside the Nashua YMCA, which is the Taj Mahal of YMCAs. It put our poor, long-suffering (albeit in the middle of a major makeover) Quincy Y to shame. So much so that all I wanted to do was hang out in the well-appointed coziness until Hubby finished the half (they started before us 5Kers). I was wearing my bib; that counts as a run, right?

Thankfully, my desire to actually finish this challenge in 2012 outweighed my desire to stay toasty (although not by much), and so I hauled my annoyed body to the start to join a small-ish group of fellow short-distance runners.

Once I got going, it wasn’t too bad. I was glad I finally busted out the CW-X tights, even though I am convinced they make me appear about a foot shorter than I actually am (which is pretty darn short).

It was a trail run of sorts, through the Mine Falls Park, so I spent an inordinate amount of time staring at my feet and dodging tree roots that would definitely have spoiled my party. The scenery was quite lovely though.

There were hills, naturally, so I walked a bit. I’ve entered a new zone of zen when it comes to slopes. The shame I once felt about being so lousy at them has given way to a desire not to have an asthma attack and wind up prone on the side of the road. I can walk a hill almost as fast as I can run one, so I’d rather conquer it in a dignified fashion rather than splutter and swear all the way to the top. (Note: I use the term “dignified” very loosely. I am rarely dignified while running.) 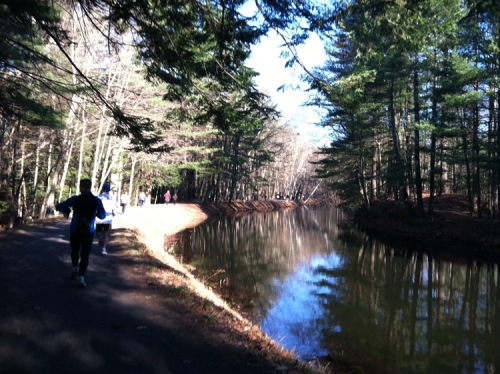 Mine Falls Park in Nashua, NH.

What happened next was … I got lost. OK, maybe not technically lost. But for a couple of heart-stopping minutes I couldn’t figure out which path to take at an ill-signed juncture in the course, and there was not a soul around to ask. All the half-marathoners had peeled off, and I was in a huge gap in the 5K pack. (So, this is what it’s like for the guy at the front.) Good thing the scenery was still quite lovely. And there was a water source if things got really dire.

I eventually figured out the route and scrambled to the finish. Little did I know that there were only two other people in my age group—two!—in front of me.

Yes, before you ask, there were more than three people in my age group. And yes, my time was pretty slow. (You can start laughing again now.) It’s pretty funny that I won an age group award with the pace of a drunk tortoise. But, hey, I’ll take what I can get. Coincidentally, Hubby was also third in his AG, but much more legitimately so.

* This run had a fabulous set-up with boxes full of goodies out of which you could take what you want, rather than getting a whole lot of stuff you don’t need. Genius.