I’ve been thinking a lot about a possible “challenge” for 2013. Twelve half-marathons in 12 months, perhaps? A race in every U.S. state? A 5K every day? 2,013 miles in 2013? A marathon? A triathlon? A new Lululemon outfit every week? (OK, that last one is just wishful thinking.)

But so far I haven’t stumbled upon something that I feel like I can actually achieve. I have a half-marathon in March, so I’ll need to get my butt into gear for that, but I like writing about training about as much as I like doing it (which is to say not at all). So for now, I’m just going to keep running occasional races and writing about them. And who knows, I might run into something huge along the way …

After polishing off 52 races in 2012, I was ready to take a big old rest from running. I had already accumulated enough T-shirts to outfit a small country, and I was looking forward to getting my weekend mornings back. Which of course is why Hubby and I decided to start 2013 … with two races in one day. Makes perfect sense, yes? 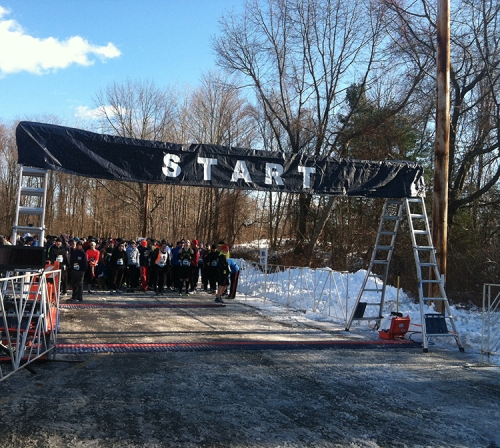 Lining up for the start of the First Run in Lowell, MA.

We ran the 1st Run in Lowell, MA, last year in unseasonably warm temperatures. Some of you may recall this post! I remember being overdressed for the occasion and wondering how on earth my face could be so red despite the winter(ish) temps. (Very little has changed.) Still, it was a great run and we were excited to be doing it again.

The weather was much more predictable this year (read: nasty cold), which means I wasn’t as convinced of the merits of running at all. There had been snow over Christmas that had frozen into menacing ice, and I had mental images of spending a large amount of time on my butt. The start/finish was particularly perilous. Like I don’t have enough impediments already. 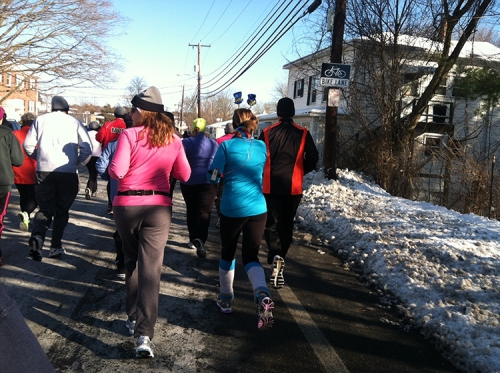 Spot me! (Photo by Ted Tyler)

Anyway, I had the customary 90 minutes of pre-race wait time (thankfully in cozy quarters) to talk myself back into it, and by the time we lined up I was good to go, albeit freezing and wearing Hubby’s Will Run for Beer series jacket, which made me look like a kid dressed in Dad’s clothing. (I knew I was going to wind up having to take it off, but I refused to let the common-sense side of my brain win over the freezing-my-behind-off-at-the-start side of my brain, so on it stayed.) 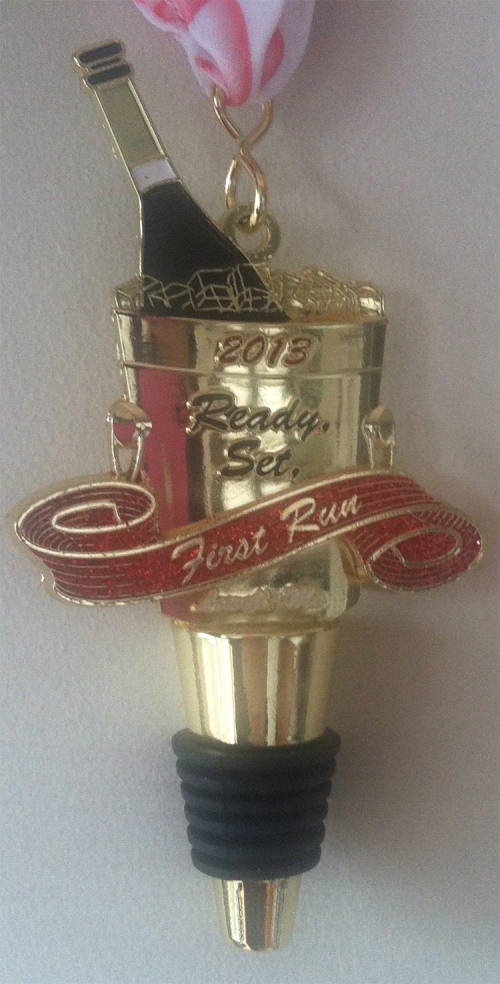 Medal after my own heart.

The race was typical. It was hard-going at the beginning, which may have had something to do with my not having run for a few weeks. In fact, I am sure I could hear my calves hollering, “Whoa! What is this crap!?” The cold messed with my lungs, and I knew my time wasn’t going to be a huge improvement on last year’s. But that’s OK.

I was really only in it for the hat. And the gloves. And the medal that doubles as a wine stopper.

Never let it be said that I don’t have my running priorities in order.

Despite copious races last year, I still haven’t managed to figure out how not to look like a moose while I’m running. I know this to be true because there is a great deal of pictorial evidence available for me to cringe at. Props to the First Run folks though for making pictures available to all the participants at no charge. So it costs nothing for me to share my shame! (I have developed a trademark “smile and two-handed wave” maneuver that hopefully draws attention away from the fact that I am the most undignified-looking runner on the planet.)

Spot the moose! And yes, that is the aforementioned giant jacket tied around my waist. (Photo by Jim Rhoades)

I chose the girly one. No T-shirt for this race either!

Because I just had to start the new year with the reddest face possible, Hubby and I also decided to run the Millennium Mile in Londonderry, NH that same day. It wasn’t too far from one run to the other, and although we did miss out on the post-race beer at Run #1, I thought it was worth it. I’d never run a mile flat out before, and I was curious to see how I would do. Also, there was another hat. You can never have enough of those!

It was still as cold as the tundra, but I knew I was only going to be running for 10 minutes, if things went well. 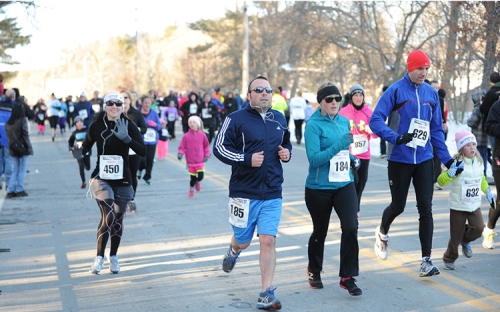 As it turns out, things went very well. Aided by a friendly tailwind and the fact that the course was almost all downhill, I ran faster than I ever thought I would (8.23). I may have to focus on the mile distance from now on. It seems tailor made for me!

As long as there’s a friendly tailwind and it’s all downhill, that is …