So many half-marathons, so little time

First, a HUGE shout-out to Jill at Jogging Jeans for the fabulous dedication yesterday. Jill is one of my favorite bloggers. She is hilarious and lovingly irreverent, and definitely gets where I am coming from when it comes to running. I can’t imagine that anyone reading my blog wouldn’t have already visited hers, but if you haven’t, do it immediately. I am very excited to meet her in May at the Pittsburgh Half. You should come and join us!

OK, back to business…

While I was turning many shades of red and cultivating my moose-running skills in 2012, my running buddy, a.k.a. Hubby, a.k.a. Mr. I Finished 20 Minutes Ago, a.k.a. guest blogger extraordinaire, was running 21 half-marathons. That’s right, 21. He initially committed to 12 in 2012, but got so into it that he wound up switching the digits. I think that deserves a moment, don’t you?

It’s pretty good for someone who only started running (and exercising, for that matter) at the end of 2010, when he joined the Massachusetts National Guard and realized he literally needed to get up to speed for the physical fitness test. If he hadn’t caught the running bug, I never, ever would have put a toe anywhere near a road race.

Did I mention how crazy/amazing I think 21 half-marathons is? (This is in addition to a bunch of other distances, including two full marathons. He ran 68 races overall last year.) To celebrate, here’s some bib action from ’12, but it’s clearly not all of them. (Who knows what happened to those.) 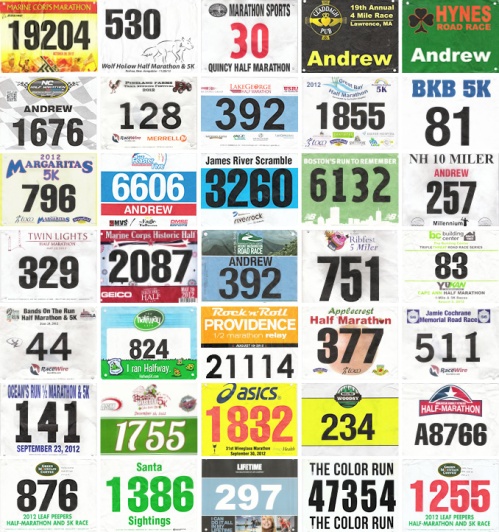 For the record, here are the 2012 half-marathons. They are all amazing races, should you feel so inclined to partake in one or two – or 21 – in 2013. The ones that are asterisked he is either already registered to run again, or they’re in his plans. Those with a double asterisk I am “running” too.

18 responses to “So many half-marathons, so little time”