Guest post alert! Loyal long-time readers (you rock, by the way) will have noticed Hubby’s influence on this blog, especially in the shopping department. I let him loose this week for his second guest post…

There have been a few times when my shopping has been the inspiration for posts at Stride & Joy: Bunny Bars; Bai; Mamma Chia.

Most of these products we continue to buy in bulk. This must concern the delivery man when he is lugging up heavy boxes of beverages from Amazon and wondering why the hell these two can’t just order T-shirts! A few months back, he got his wish – something light, something filled with music, something that is making me run to a different tune.

I had tried a number of options for headphones during runs, but the wires would always get tangled, or the headphones would slide out of my ears because of the water I douse myself with. Sometimes I think the folks at the water stops must feel they are encountering Ted Striker when I throw another cup of water over my noggin’ . Well, if those folks are of an Airplane-appreciating age …

It became more frustrating on longer runs, and there are only so many runs with bands along the route. Something had to be done. So instead of resorting to running with a boom box, or backup vocalists, I was fortunate enough to find salvation from a group of fellow frustrated runners with some product savvy.

This salvation came from RoadNoise and in the form of something that can best be described as … a vest. Not a suit vest, for I am not that classy when it comes to my running attire. I do like a nice pair of jorts though!

The RoadNoise Running Vest is designed to allow runners to listen to music on races that prohibit headphones, something I have noticed is more common on longer distances. The founders of the company were inspired after running into a change of rules on their “favorite 24-hour race” (how many times have we all used that phrase!).

It has two waterproof speakers (more on how essential the waterproofness is shortly) and a small pocket at the front to hold your music player of choice. It slips over your head and there are two Velcro straps on the side to hold the vest in place.

The RoadNoise website recommends that it fit snugly, and they are right about that. It’s not a lot of extra weight, but you would not want these speakers jouncing around on your shoulders for miles and miles.

I took it out for one test run and then it had its first half-marathon debut. It was heavenly. Tracey loaded up my iPod with a great set of tracks and the race felt so much better, though Lonely Island and their passion for nautical travel may have caused a few shocked looks. Even though the speakers are small, they can be cranked up fairly loud. Note to self, don’t crank it up to 11! 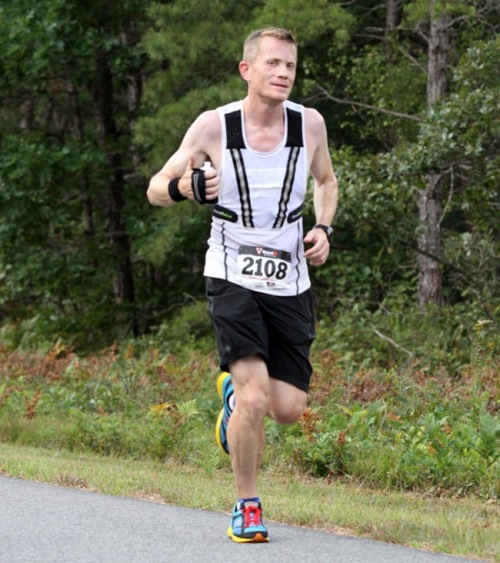 RoadNoise in action at the Applecrest Half Marathon in Hampton Falls, NH.

All went well for several races until I doused myself at a water stop and drowned my iPod. Boy, did the sound of silence suck the joy from my stride. It was a long way to the finish. Tracey came to the rescue with her waterproof iPod Shuffle.

So high marks to the folks at RoadNoise for solving a problem in style; my only request is that the mesh should be in a color other than white. It’s been a long sweaty summer and despite several washings, it’s showing signs of hard use.

11 responses to “See my vest: A RoadNoise road test”