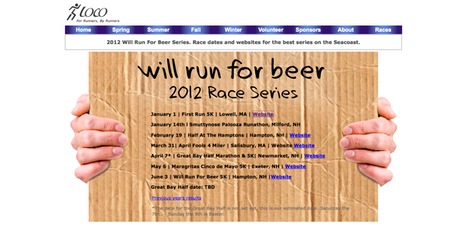 Now this is a goal I can meet. http://www.willrunforbeer.com.

Although I’ve been on a bit of a running hiatus during my sojourn Down Under, there will be no rest when I get back to New England (which during my five-week absence has nastily decided to morph from late-summer bliss to early-fall bone-chill). I will scarcely have time to draw breath before I am back scarcely drawing breath in a nose-hair-freezing 5K run.

But that’s OK, because Hubby has discovered something wonderful: the Will Run for Beer 2012 Race Series.

Now, I’m more of a G&T girl myself, but I say cheers to any event that combines running with post-race glass-hoisting (experts say you need to stretch out those arms, after all). This series, which has been going since 2008 (the Before Time), is put on by a New Hampshire company called Loco and sponsored by Portsmouth, N.H.’s Smuttynose Brewing Co. Need I say more.

There will, of course, be updates from the series as I go along, but our presence will definitely be felt at the Smuttynose Palooza in Milford, N.H., on January 14. One, because it’s a relay half-marathon (I can just run a bit!) that’s indoors; and two, because the website asks the probing question: “What is a Palooza?”