A return to the site of my running shame

The setting doesn't get more Australian than this. The start of the Brooks Spring Into Shape Sydney Series Race 2, in Parramatta Park.

When I was in high school, some (ahem) years ago, I got a zero on my report card for failing – twice – to run the mandatory cross country (I can’t recall the precise distance; it was a few kilometers masquerading as an eternity. All I know is I had to get picked up in a car). For someone who prided herself on doing well in school, this epic fail was unacceptable. I never quite got over it.

So it was with mixed feelings that I returned to the site of my shame –  Parramatta Park, in Sydney’s western suburbs – to run one half of the Brooks Spring Into Shape Series, benefiting the Heart Foundation.

But this time I was ready. No knee-length skirt and sensible brown shoes for me (I was forced to run my second attempt in my Catholic school uniform. Not that it really mattered; I failed wearing sneakers too). No, this time I had eight 5Ks under my belt, a pair of brilliant shorts and an iPhone. And it was only a 4K. I was going to triumph.

In your face, Parramatta Park!

It was a glorious day for a run, under a trademark Aussie blue sky. And the park really was quite lovely, with its jacarandah trees in vibrant purple bloom. But, oh that sun (nasty, shadeless school-picnics flashback).

I had forgotten how merciless the Australian sun is, even in the early morning. I started well, running the first two kilometers without missing a beat. I even managed to scale a couple of (granted, minor) inclines with my newly realized hill running techniques. But the sun was determined to get the better of me. And so it did. 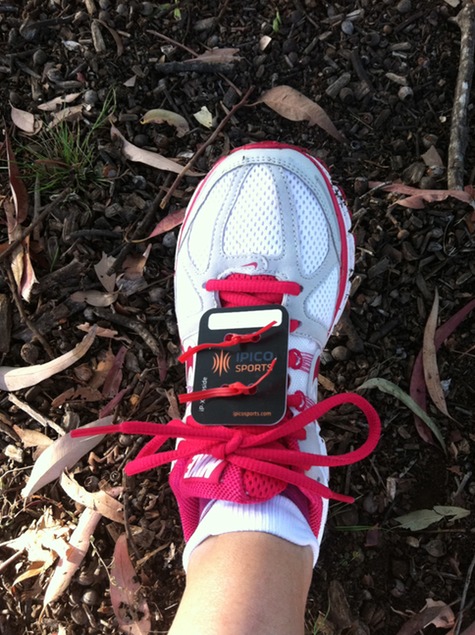 I gave up the dream of running a full race, although I walked only a couple of times. Still, I finished strong (on grass, no less), despite the absence of my cheer squad. Considering it was my first run in more than a month, I was happy.

In addition to the opportunity to finally consign my lingering high-school shame to the Dumpster of history, I was excited that this race gave me the chance to wear my very first sneaker timing tag.

Now I am hard core!

The event: Brooks Spring Into Shape Sydney Series, Race 2
The location: Parramatta Park, NSW, Australia
The date: November 5, 2011
My time: 28.01
The T-shirt: No T-shirt! I had to run both races of the series to get one. (I don’t know what the Aussies have against T-shirts.)
The aftermath: Water. Yep, water.

A couple of minutes into the race.