I have been known to whine about running. This past weekend, my running was all about wine. It was bound to happen eventually. 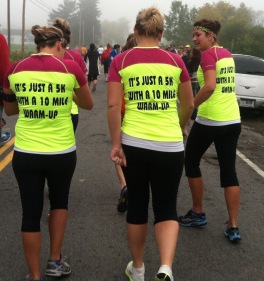 We had been very excited about the Wineglass Marathon and Half-Marathon in Corning, NY (the town that glass built). Not only was this point-to-point event associated with sparkly adult beverages, it promised a mostly downhill route. That’s right: wine, and hills at the good angle. It was already my favorite run. The fact that it was another half-marathon had somehow managed to escape my addled 5K brain until last week. I really wasn’t prepared for it.

We made the 6.5-hour trek from Boston on Saturday to pick up our goodies at the expo. The organizers were clever. They had orchestrated it so the runners collected their packet in one location and their souvenir wine glass and bubbly (that’s right: wine glasses and bubbly!) at a separate spot, in downtown Corning, thus ensuring a steady stream of people that day onto the main street. Genius.

I knew we had to get up before the roosters the next day to drive, park, and hop on a bus to be shuttled to our respective start lines (me: half; hubby: full—his first!). But that advance knowledge didn’t make it any easier when morning came around, neither did getting smooshed on to a smelly school bus in the dark. (My early-morning grouchiness and anti-school-bus sentiment—I have no nostalgia for American school buses, for obvious reasons—are no reflection on how amazingly well this event was organized. It was brilliant all around.)

It’s waaaaay too early for this!

The half-marathoners were dropped off at a high school a couple of towns over, where we were ushered into the gym to wait (it was 6.30). It was beyond chilly outside (can you believe it?) so I was grateful for the indoor holding pen even though it was rough on the keister (I realized later there was a huge pile of gym mats outside the door that some people had availed themselves of to take a nap; dang my lack of knowledge of American high schools). By the time we were told to line up at the start, I was ready to sleep for a week. An enthusiastic early-morning runner I will never be. How the heck was I going to stay awake let alone upright for 13.1 miles?

Did I mention that I was grossly unprepared for this run? Even though my training got thrown off when I was getting ready for my first half, the SeaWheeze in August, I can at least say I did some. This time, I ran my weekend race/s as per usual and that’s about it. Poor form, I know. I’m not advocating this behavior, but there’s no denying it’s mine. I do some cross-training during the week, but I don’t run a huge number of miles. When it comes down to it, I don’t really like to run alone, especially when there’s no promise of free food and beer at the end. 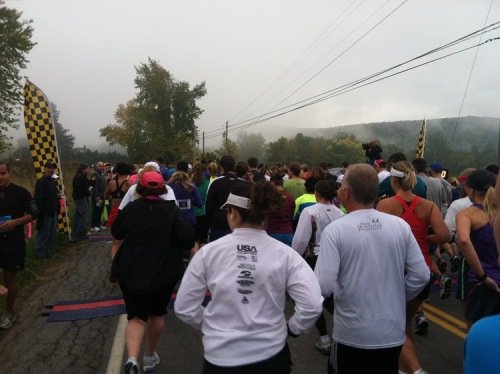 So I was looking to Mother Nature and gravity to give me a leg up. The weather was ideal. My shivering at the start was a pretty good indicator of that. Thank goodness for my new arm warmers. It’s funny how much Hubby and I were agonizing over what to wear on this first really chilly run of the season. Long sleeves? Long pants? Gloves? We needed the running fairy godmother to tell us what to do.

I started off in the middle of the pack mostly because I didn’t make it to the end in time (dang port-a-loos), so I was carried along on a wave of speedier runners for the first 10 minutes or so. I saw the 10.40 pacer (goal time: 2.20) and briefly entertained the idea of trying to keep up with her but realized that would be extreme folly.

So I settled into a pace around 11-ish and tried to maintain it as best I could.

I enjoyed the misty beginning.

It’s amazing what cool weather and hardly any hills will do for a runner of dubious ability such as myself. Apart from a quick loo break at mile four and a couple of water-stop slowdowns, I didn’t walk for the first nine miles. Nine miles!!! I have never managed to go that far sans walk. I’m pretty sure I was on autopilot for much of it, which is a running state I’ve always wanted to attain. I’ve been in The Zone before, but never for any good length of time. I wasn’t really noticing anything—pain included. This run was serene in comparison to the SeaWheeze, devoid of the cheer stations and organized mayhem that characterized that event. It was nice.

At mile 10, I was yanked back to reality by a pain in my right hip and then some random stabbings in my calves and ankles. The ol’ legs were starting to get very stiff and angry, and Mother Nature couldn’t do anything about that. Slightly discouraged, I started to walk more frequently.

Just after the 12-mile mark and fully now in walk mode, I felt a swat. Then I heard a voice: “Come on. No walking! You didn’t tell everyone you were going to walk the Wineglass Half-Marathon did you!?” It was Jim, the six-foot-something, green-haired pacer I hadn’t seen until this moment (his goal was 2:30), and he had swatted me with his pace sign. I started running for a while and then stopped again until I heard “Eight more minutes!” There was NO WAY, I thought, I was going to be able to run for eight more minutes, but then I heard Jim say we could break 2.30 and I tried to pick up my pace. As I started down the home stretch, the crowd began to roar. I mean really roar. How did they know I was about to crack 2.30?! Amazing.

Yeah, they didn’t know. The first marathon runner had materialized right alongside me, so I got the benefit of the crowd cheering him in as he won his race.

When I saw that there was still a :29 on the clock, my disbelief almost stopped me in my tracks, which would have been bad. Determined to not let it tick over, and not wanting to let my new roaring fans down, I found a teeny bit of energy and just made it across.

Did I just run a half-marathon in under two-and-a-half hours? (My SeaWheeze time was 2.47, for comparison.) I fully expected to look up into the sky and see pigs flying.

Oh, and while I was doing that, Hubby was running his very first full marathon, which is actually way more impressive. Hmmm, I probably should have written about that instead …