We had originally signed up for the WOW Fest, in Laconia, NH, to run with our friend Courtney. So it was sobering when we arrived last Saturday morning knowing he wouldn’t be there. (In fact, his service was later that day.) But he was on our minds, and he wouldn’t have been happy had we decided not to do the run on his account. (Still pushing us!)

Taking a leaf out of his book, we also completed an event the day after — the Ocean’s Run in South Kingstown, RI. It’s a lovely area, one we hadn’t visited. Something I love about this running business: It definitely gets us around. 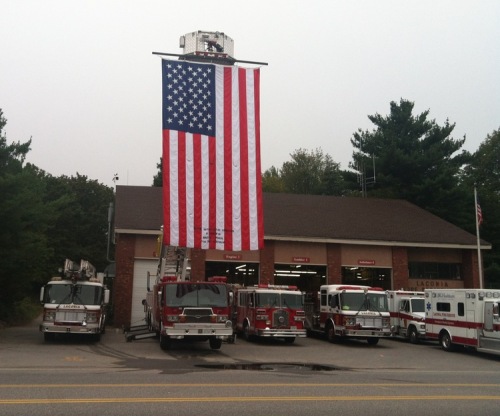 The Laconia Fire Department went all out for the WOW-festers.

This isn’t me and mine are a much more awesome color, but you get the idea.

It’s amazing how much the weather has turned in the past couple of weeks, seemingly in the blink of an eye. It makes me giddy, because not only is it much more comfortable for running, I can now bust out the Lululemon arm warmers I bought at the SeaWheeze Half-Marathon. I can’t say enough about how fabulous these things are. You’re nice and warm waiting around at the start, but then, presto, you roll them down as you start to heat up along the way, and then you’re nice and cool. Arm warmers, where have you been all my life?

I’m slightly ashamed to say that “I’m not prepared” has become a bit of a catchphrase of mine, but I really wasn’t ready to run two races back to back this particular weekend. Granted, they were both only 5Ks, but I had taken a two-week hiatus after the Jamie Cochrane run and a general feeling of malaise was starting to set in.

I felt OK for the first mile of the WOW Fest (supporting the WOW Trail, a nine-mile recreational pathway in the City of Laconia), but then again I can usually manage the first mile of any run. It’s the second and third miles that mess with my head. I love that I have been doing this for 18 months, have done a half-marathon, a 10-miler, a few 10Ks, and a gazillion 5Ks, and I am still struggling to get through even the shortest distance without walking. Granted, when I am running, I’m a lot faster than I used to be.

The two-mile kiss of death at the WOW Fest.

I was bummed that I didn’t rock the WOW run. I had assumed that the great weather would automatically translate into a better time, especially given how many summer miles I had logged, but I forgot that I still had to, you know, work for it. Dang. I guess I was expecting a little more of a leg up from Mother Nature. There were some rolling hills but none so brutal that I really should have been bothered. (OK, I was bothered. There’s no getting around it.)

It was a similar story for the Ocean’s Run. Yet another tough run in a nice setting, this one was also hilly but nothing I seemingly couldn’t manage. However, although I started off well, I petered out pretty quickly and never regained my energy. I walked a lot. The fact that it was insanely windy along the water probably didn’t help. It was a pleasant area though and my slowness gave me a good chance to look at houses. I’m thinking I might be on to something here. Real estate running tours?

The Ocean’s Run in Rhode Island. Hubby did the half.

I figured these two so-so runs made for one decent run, so I decided to smoosh them together for the purposes of my challenge. I ran my second half-marathon this past weekend. What are the odds that “I’m not prepared” came up again? Stay tuned …