Wineglass Half Marathon recap, aka, Slow and very slow with hints of plodding

Last year, I ran the Wineglass Half Marathon in Corning, New York, and did pretty OK. Of course, “pretty OK” is all relative, and my version of it is probably many other people’s “not so hot.” But I I set a PR that I have a feeling I’ll never be able to beat, and I was really happy.

The Wineglass is my kind of run. It’s mostly flat or downhill and you get a free glass and a bottle of bubbly along with the shirt and the other bits and pieces. No wonder I set a PR. Although, the PR may have had something to do with the fact  I had spent 2012 running so many races every weekend that I had by default trained for that one (shock!), but still, bubbly booze is a powerful motivator.

Smooshed way in the back at the Wineglass Half Marathon start.

This year, Hubby had the brilliant idea of suggesting this race as a destination run for our group at the Quincy Y. There ended up being nine of us who traveled from Boston. So fun! The rest of the group like to do wild and crazy things like train consistently, which means they were all infinitely more prepared than I was, so I said goodbye to them and sneaked into the back of the pack where I belonged (Hubby and our trainer Mary were doing the full marathon). Last year, I was propelled to the finish by the 2.30 pace runner, but once you consign yourself to 3:00 and above, I feel like you’re pretty much on your own. 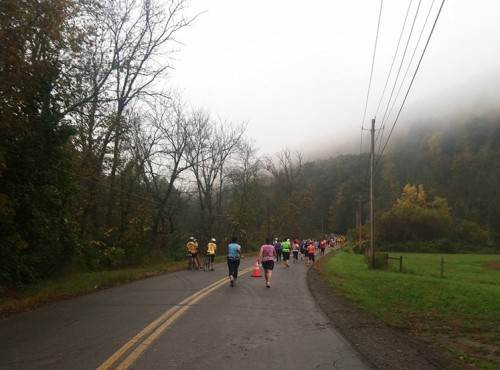 I had decided that I was going to mostly walk this one, as I didn’t want to injure myself coming into the race cold. Unfortunately, there’s no such program as Couch to Half Marathon in Two Weeks. I could really use one of those.

I did start off jogging, for about a mile, but it felt pretty torturous, so I decided to stick with the original plan. I’m a pretty fast walker, so I thought I could maybe knock it over in about three hours. (I did the Mad Half Marathon last year in around that time, and figured that given that the Wineglass is a net downhill course and the Mad is crazy hilly, it would be a cakewalk.)

I guess I should learn how to bake.

I remembered this course really well from last year, and I remembered exactly where I was before I finally petered out and had to walk. It was at about the nine-mile mark. Man, nine miles is a long way when you’re walking as slowly as I was this time around. And don’t even get me started on 13.1. For the first time in many, many races I felt … and I can’t believe I’m saying this … kind of bored. Don’t get me wrong, this is an amazing event. I love it and would happily do it every year regardless of the shape I’m in. But it was tough for me for many reasons.

Thank goodness it’s pretty. I was out there long enough.

I kept going even though my legs were turning to jelly and my brain to mush. I was so relieved when I turned the second-to-last corner that I even broke out into a little jog (that may have been mostly for the camera), but I couldn’t sustain it. For the first time ever (apart from the Mad, where I was in a walkers division), I resigned myself to walking across the finish line.

But that’s OK. I was just so glad to cross it that I didn’t really care that the race wasn’t my finest hour. All the others from the Quincy contingent did amazingly well, and everyone had a great weekend. I’ll toast to that.

I have been known to whine about running. This past weekend, my running was all about wine. It was bound to happen eventually.

We had been very excited about the Wineglass Marathon and Half-Marathon in Corning, NY (the town that glass built). Not only was this point-to-point event associated with sparkly adult beverages, it promised a mostly downhill route. That’s right: wine, and hills at the good angle. It was already my favorite run. The fact that it was another half-marathon had somehow managed to escape my addled 5K brain until last week. I really wasn’t prepared for it.

We made the 6.5-hour trek from Boston on Saturday to pick up our goodies at the expo. The organizers were clever. They had orchestrated it so the runners collected their packet in one location and their souvenir wine glass and bubbly (that’s right: wine glasses and bubbly!) at a separate spot, in downtown Corning, thus ensuring a steady stream of people that day onto the main street. Genius.

I knew we had to get up before the roosters the next day to drive, park, and hop on a bus to be shuttled to our respective start lines (me: half; hubby: full—his first!). But that advance knowledge didn’t make it any easier when morning came around, neither did getting smooshed on to a smelly school bus in the dark. (My early-morning grouchiness and anti-school-bus sentiment—I have no nostalgia for American school buses, for obvious reasons—are no reflection on how amazingly well this event was organized. It was brilliant all around.)

It’s waaaaay too early for this!

The half-marathoners were dropped off at a high school a couple of towns over, where we were ushered into the gym to wait (it was 6.30). It was beyond chilly outside (can you believe it?) so I was grateful for the indoor holding pen even though it was rough on the keister (I realized later there was a huge pile of gym mats outside the door that some people had availed themselves of to take a nap; dang my lack of knowledge of American high schools). By the time we were told to line up at the start, I was ready to sleep for a week. An enthusiastic early-morning runner I will never be. How the heck was I going to stay awake let alone upright for 13.1 miles?

END_OF_DOCUMENT_TOKEN_TO_BE_REPLACED

Since I started running last year, I’ve packed in a lot of races. So many, in fact, that you’d think one thing would be painfully obvious to me by now: There. Will. Be. Hills. I figure the fact that hills continue to elicit from me such breathless rage either means I have some unresolved hill-related issues from my past or I really need to take an anger-management course.

Looking back through some of my recent posts, I’ve noticed a pervasive “hills = evil” theme. And while they are evil, all this complaining has made me concerned that I’m turning into Stride and Killjoy.

To that end, I have decided to issue a moratorium on hilly rants. Although, this doesn’t apply if a hill is a) unnaturally steep or b) occurs at a particularly inopportune place in a run, such as right at the freaking end. Which brings me to this week’s event, the Lake George Half Marathon and 5K, No. 18 in my 52 Weeks, 52 Runs challenge.

I love how the most idyllic settings have produced, for me, some of the most challenging runs. Salisbury Beach, MA; Riverside Park in NYC, the covered bridge in Henniker, NH, and, now, Lake George, NY.