For whom the cowbell tolls

Because the weather has been seven levels of crap here in Boston, I thought I’d cast my mind back to a happier time—one that didn’t involve wearing winter socks at the end of May and shivering my butt off. (UPDATE: So, Memorial Day turned out to be a stunner, but it was a cold, cold road to get there.) My sunny time-machine moment comes courtesy of the Ukrop’s Monument Avenue 10K in Richmond, Va., which was a month ago, but I had to post about my awesome adventures in Pittsburgh first, so I’m a little out of chronological order.

Waiting for the elites to start the Ukrop’s 10K. Look at that sky!

I’ve done a lot of races, but the Ukrop’s 10K is officially my favorite. It’s the happiest run around. You should all put it on your calendars for next year. Ukrop’s is a huge event (40,000 participants) but run so smoothly you’d think it was tiny. It has a superior expo (having also been to a number of expos, I know that for sure. Is it possible to get expo fatigue?). And it has a fantastic course: flat as a pancake, which, as you all know, speaks to me. As do pancakes, but that’s another story. The route, which travels out and back along Monument Avenue (wide road, gorgeous houses) is lined with great bands and crazy spectators. There are so many bands, in fact, that you don’t need headphones. I love that, because my new headphones suck.

It’s such a big race that Hubby’s 10K is over before mine even starts, which I find more amusing than it probably is. 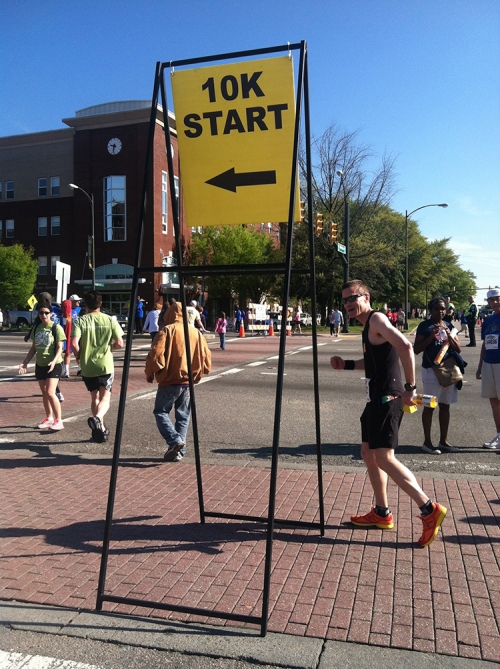 Walking to the start of my run. Hubby has already finished running. Or has he …

It’s become a cliché to say that I wasn’t prepared for a race, but this time I had a legitimate excuse: a horrible, no-good, weeks-long cold, which on the flight down from Boston had developed into horrible ear pain. At the risk of sounding like a whiner, it was really, really, really bad.

But I wasn’t going to spend yet another runcation stuck in the hotel (hello, North Carolina Half), so I decided to suck it up. I was meant to be in a slightly faster corral, but I hung back a bit, assuming I’d just walk the whole way. Hubby, who had finished his 10K in fine form, as is tradition, decided he’d run/walk along with me for moral support. He also brought along a cowbell. 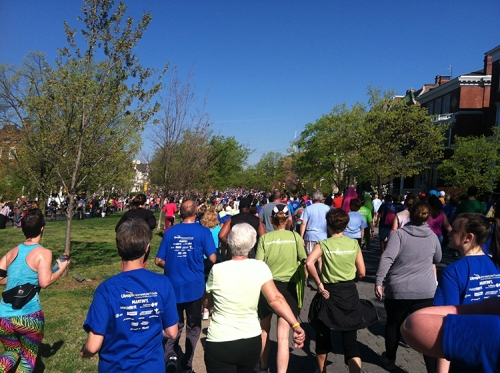 Out on the right, back on the left.

He slid into the race just after the start and we spent the first 10 minutes or so playing human dodgem with walls of walkers. It wasn’t their fault, but I did regret starting so far back in the corrals. We eventually broke free and started slow-jogging. I call it slow-jogging because plain “jogging” was overstating it at that point.

You know how folks line the streets during big races and wave motivating cowbells in your direction? Well, imagine having your very own motivating cowbell waver running right alongside you. I think people were confused about where the clanging was coming from. Every few steps I took, there it went again. Just when I started to slow down, another clang. Hubby and I kept getting separated in the crowd, but I always knew where he was thanks to the cowbell, and I kept on going. It was some kind of genius. 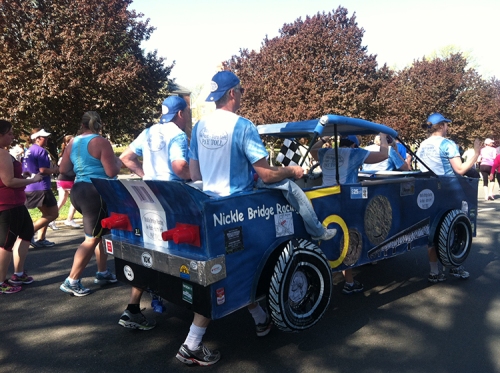 I forgot to mention that this race is also a crazy costume affair. This car was one of my favorites. And, just for Jill at JoggingJeans.com, look at their fake legs!

This went on for about 5K. Run, clang. Run, clang. At about the halfway point, Hubby wanted to exit the pack, mostly because he didn’t want to cross the 5K mat again wearing his bib. So he peeled off onto the grassy divider in the middle, with plans to meet me on the other side after I did the turnaround.

Despite the fact that he was apparently clanging like a crazy person on the side of the road, I managed to miss him as I jogged by. (I had upgraded to “jog” at this point. Still a little shy of “run.”) Without my cowbell motivator, I was worried I wasn’t going to be able to continue, but I kept up my very slow and steady pace all the way to the finish line, borrowing the energy of the thousands of people around me and the fabulous bands. I was happy.

The really exciting thing is that despite no training—actually, more like negative training, given how much time I’d spent in bed—I was only a few minutes slower than last year.

Saved by the cowbell!

11 responses to “For whom the cowbell tolls”