I ran 10K this past weekend.

Some might say that what I was doing was jogging. But that’s just semantics. For a distance of no less than 6.2 miles, I did not walk. I may have slowed briefly to obtain water, and I may have adjusted my pace to snap a photo or two, but there was more than enough running involved to make up for all of that. Did I mention that I ran 10K? 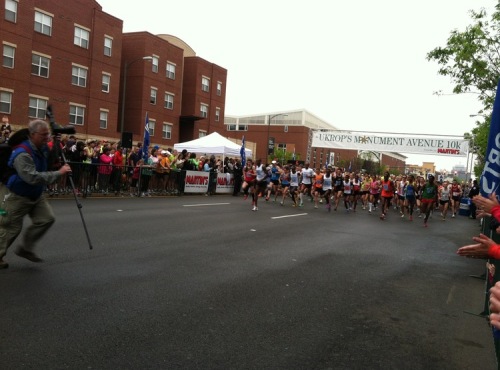 The super-fast folk take off at the start of the Ukrop's Monument Ave. 10K in Richmond, Va. Meanwhile, a photographer runs for his life.

The occasion of my triumph (which may be overstating it) was the Ukrop’s Monument Avenue 10K in Richmond, Va., No. 14 in the 52 Weeks, 52 Runs challenge. We had signed up for our second mini-runcation many moons ago. At the time I could barely get through a 5K, and had no idea how I was supposed to go any farther. I still felt that way a few weeks back. Although I had been racking up the 5Ks, and had even managed my first five-miler, I wasn’t exactly powering through them with ease, as anyone who has seen my face at the end of a run will attest (I’m not even going to address my frankly ludicrous running style; let’s just say you would have a hard time distinguishing me from a moose).

Particularly amusing was the idea that Hubby would complete the entire distance before I even started. So ginormous is this event that runners were put into waves depending on their estimated finishing time. Hubby was in Wave C; I was in Wave WA (jog/walkers: 90 to 100 minutes). Not only did I have time to watch him come home, we were able to squeeze in brunch and a movie before I started. OK, maybe not, but I think we had time. 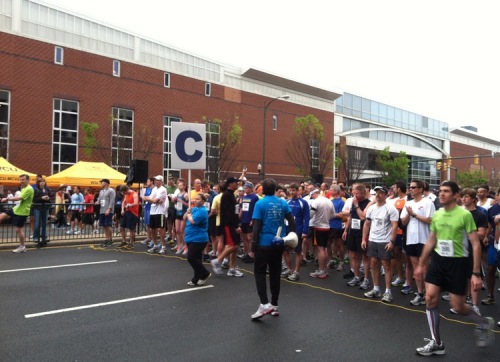 My wave. What we lack in speed, we make up for in enthusiasm.

It was a drizzly day, which was perfect for me. I have a narrow temperature comfort zone at the best of times, but it’s reduced 10-fold when I’m running, or jogging, or whatever you want to call it. Cool with 100 per cent chance of cool is my ideal situation …

The Barney method (not the dinosaur)

There’s an episode of How I Met Your Mother where Barney Stinson runs the New York Marathon on the back of no training. His theory:

“Here’s how you run a marathon. Step one, you start running … There is no step two.”

I think I was channeling a piece of Barney at the Ukrop’s 10K. And no, I’m not suggesting that a no-training marathon is a good idea. Barney’s legs stopped working at the end of the episode, after all. Also, it’s TV. But events of the past few weeks conspired to ensure I didn’t get in a lot of training leading up to this race. (“Events” meaning “life.”) So, I started running, and hoped for the best.

I’m convinced the brilliance of the event propelled me along. The route was lined with bands, and rappers, and cheerleaders with saucy signs (I believe at one point I saw “Nipple chafing turns me on,” but I may have been overcome). There were Irish dancers, members of the Falun Gong, and professional hula-hoopers. Perhaps I was so distracted, I didn’t notice I was moving.

Encouragement from the sidelines.

There was more water and Powerade than you would ever need in your lifetime. And it was flat. Utterly flat. There was also a large costume contingent, which always impresses me. (If people can run in a cardboard car, surely I can run in shorts.) At one point, I was trailing Mr. Stay Puft and his Ghostbuster buddy. Priceless.

Something strange in the neighborhood ...

My lack of preparedness didn’t seem to cramp my style – or my feet, thank goodness – but I did have a moment of realization: If you’re going to be waiting around for more than three hours for your 10K to start, you might want to eat something besides a banana.

Thankfully, I had a food-delivery system in the form of Hubby, who saw me off at the start, ran back to the car, ran to the four-mile marker, and was on hand to provide me with Cliff Shot Bloks as I whizzed* by. (*May not have involved actual whizzing.) I was so grateful for this energy boost that I kicked my pace up a notch and lengthened my stride. This lasted for about two minutes. But for those two minutes, I felt like an actual runner. I’ve been in The Zone before, but this was an entirely new sensation. I liked it. I’m inspired to start training properly. Sorry, Barney.

I flagged over the last mile, but somehow kept going without incident or injury, and even managed a non-deranged smile as I crossed the finish mat. It was the farthest I’d ever run.

Fourteen runs down, 38 to go. It’s a long, slightly longer road ahead.