It occurred to me soon after I started Stride & Joy that one of the requirements of the runblogosphere is that you MUST participate in at least one Color Run. Two if you want to be taken really seriously.

I kid. I do admit that the run appealed to me. But I’m not sure why. I wouldn’t have thought being sprayed with colorful crap would be that enjoyable. But I was completely sucked in by the marketing: Happiest 5K on the Planet!!! The planet!! The folks on the Color Run website may look like rejects from the Rainbow Brite factory, but they’re all having So. Much. Fun. 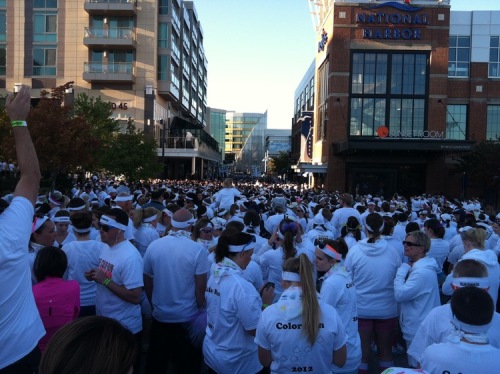 A sea of white to start.

Lest you think this is going to devolve into a rant about big, expensive, soulless running events, it’s not (although the Color Run does fall into each of those categories to varying degrees). I did indeed enjoy being covered with colorful crap, OK cornstarch, even though I didn’t emerge from the melee as colorful as I thought I would, and the wave starts took an eternity (diminishing my fun at the outset). The Color Run is expensive, but it does donate to local charities in each city it’s held in, so there’s that. And it gets people out running who may not normally do it, so there’s that as well. 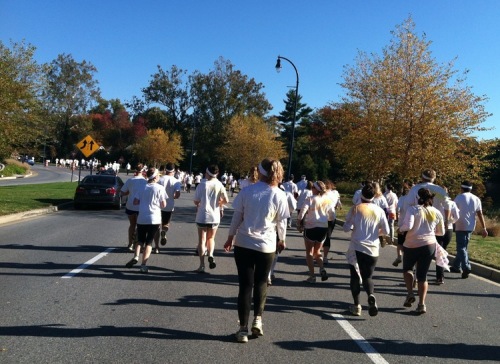 Lovely day for it.

However, mostly what I enjoyed about this event was Hubby’s get-up. When we signed up for the Washington, D.C., Color Run months ago (actually held at National Harbor in Maryland), he declared his intention to do it in a white Root Suit. The run suggests you wear white to maximize the impending colorfulness, so, he figured, why not go the full blanc?

Made sense to me.

The headband was a nice touch.

I’m surprised more people didn’t join him. Looking back, it seems like the obvious choice. You’re all in white and you don’t get colored crap in your face. Needless to say, he stood out in the crowd.

Funny thing was, when the sun hit Hubby’s face, he was all but blind, so we ran this “race” together. We were going to do that anyway as these events aren’t timed, but it became a thing of necessity.

He was practically walking we were going so slowly. I, on the other hand, was puffing and red despite doing what I can only imagine were 11.30-minute miles. So. Slow. 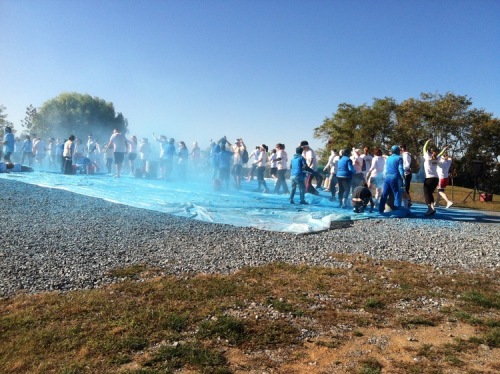 It was the first time I’d run in two weeks thanks to a combination of my parents being here from Australia and a very angry IT band, and I didn’t want to push it. I managed to get through most of the run, but I had to stop here and there. It was obvious I hadn’t done this running thing in ages. I’d forgotten how!

But that’s OK. Thanks to the fact there were no times, the internet will never know how long it took. Besides, you naturally have to add minutes for all the time spent trying to get as much colorful crap on you as possible in the color zones. See, not our fault.

All I can say is the person who invented this run is some kind of evil genius. Who likes to do A LOT of laundry. 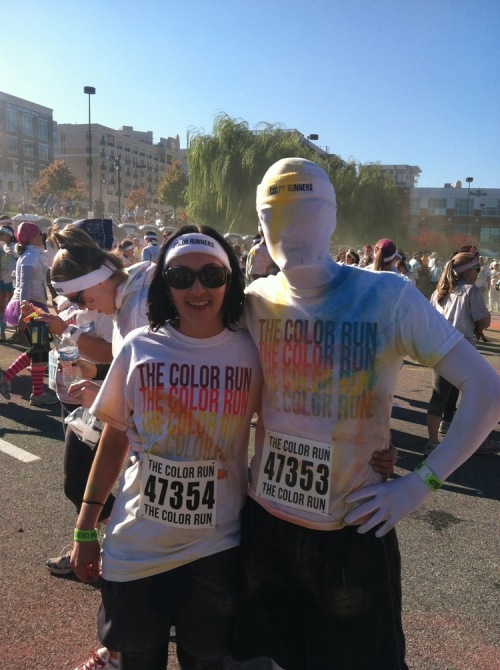 Aftermath. I think most of my color was on my back and sides.

The event: The Color Run
The location: National Harbor, Maryland
The date: October 21, 2012
My time: n/a
Hubby’s time: n/a
The cause: Local charities
The T-shirt: White cotton (not so white anymore)
The aftermath: We didn’t really stick around for eats; we had parents to entertain!