We registered ages ago for last weekend’s Stowe 8 Miler in Vermont – pre-freaky heatwave and pre-Mad Half Marathon walk, in which I may or may not have done major damage to my big toenail by wearing shoes that were too snug for extreme downhill race-walking. Had I known that the heat and the toe disaster were going to happen, I may have decided that running eight miles, a distance I had never attempted, was not such a wise move.

But I couldn’t not do it. My reputation (as someone who pays the entry fee and shows up on time) was at stake. This event certainly gave me The Fear though. Mostly because eight miles is really freaking far. Also, because Vermont has never met a hill it didn’t like.

I was supposed to be much further ahead in my half-marathon training schedule by this point, but as most of you know, that ship has sailed. I was buoyed by my not-totally-crap showing at the Mad Half the week before, but seeing as that was a walk and this was not, The Fear remained.

Should I have a strategy or something?

I initially decided I would try to run three miles and walk one, then run three and walk one. Voila, eight miles! It seemed like a good idea in the car. But when we got to the start and realized how hot it was (this race started at 9am, which – I can’t believe I’m saying this – is too late in the summer), I decided just to run and walk when I needed to. Good plan, yes?

Speedy folk at the front looking hot before they even began.

I managed to get through two miles before I needed to stroll. The sun was relentless, the air was ridiculously humid (so much for Vermont being cooler), and I knew I had a lot farther to go. It would have been folly for me to keep running just to say that I did. Besides, I had already made up my mind to not sweat the time. Did I mention this is the farthest I have ever run? 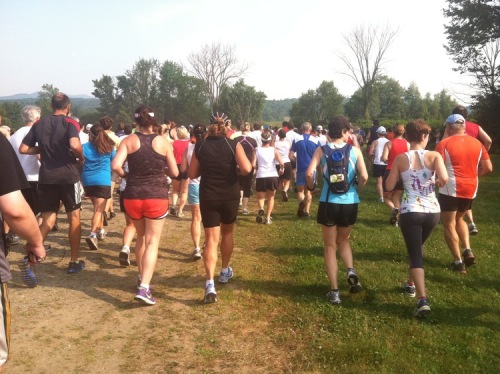 Only eight miles to go!

I was really nervous about my toe. It had begun to turn a suspicious shade of blue-gray a few days before, and the pain was intense. I had spent the past few nights icing it, but I am pretty sure it was still swollen when I put it into my sneaker to do this race. Yes, yes, probably not the wisest call. The weird thing is, I was fine once I started running. But walking was a little piece of hell. Maybe the toe prompted me to run more often than I would have otherwise. That’s my theory anyway. 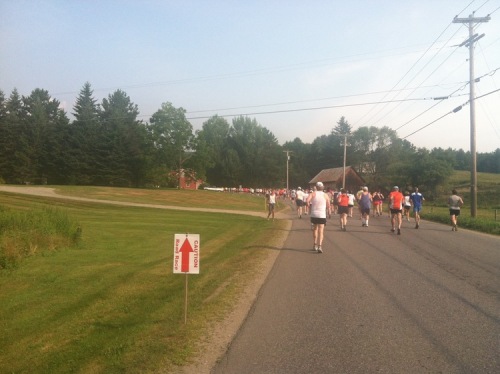 I didn’t think I’d ever catch up to the guy in the white singlet. But huzzah!

Vermont definitely has the edge when it comes to race scenery (see last weekend’s Mad event). The course went through a chunk of picturesque countryside and the town of Stowe. I was glad to be running among such loveliness and not, you know, through an industrial wasteland or something, because I may well have decided that notching up eight miles in the middle of summer (or any time, really) just isn’t worth it.

This run was tough. (I continue to love the way hard, hilly courses are described as “rolling.”) At mile six, I was briefly motivated by the fact that I was about to enter uncharted territory (I hadn’t run farther than a 10K), but then I hit a wall. Or it may have been a cliff. There’s really no way of knowing. But I kept run/walking away and even smiled at the photographer who captured me about a quarter mile from the end (while secretly wanting to punch him out).

When I crossed the finish (after struggling mightily over the final mile; Hubby had to come and cheer me in), I couldn’t believe I had done it. I still can’t believe it. I was a slowpoke in a field of uber-uber-fast runners, but that didn’t bother me at all. Eight miles, baby! (OK, so I had to instantly take my shoes off due to searing pain, and hero Hubby had to go buy me flip-flops in order for me to walk again. But still, eight miles, baby!)

(Oh, this event was put on by Loco, the guys who do the Will Run for Beer Series. Their runs have become some of our favorites.)

This entry was posted in 52 Weeks, 52 Runs, Fitness, Humor, Running and tagged 8 miles. Bookmark the permalink.