Once upon a timer: My first race as a volunteer

I’m not up to running 13.1 miles yet (or maybe ever, but that’s another story), so when Hubby signed up for this weekend’s Twin Lights Half Marathon at Good Harbor Beach in Gloucester, MA, he suggested I volunteer. My immediate response? “Errrrrrr, ummmm, ahhhhh ……. sure.”

OK, so perhaps I am not the world’s most enthusiastic unpaid laborer, especially when it involves getting up at 6am on a Saturday. But I guess I was a teeny bit keen to take a glimpse behind the race curtain. I said teeny.

Runners gather for the Twin Lights Half. The beach is just beyond the grassy dunes.

So I sent off my volunteer email and asked to be assigned to an intersection directing runners. I thought that would be fun, and I would be out there on a course looking dignified for a change (albeit in a bright orange vest). I also chose “timers,” but I secretly hoped the volunteer co-ordinator wouldn’t notice that.

I got assigned to “set-up” and “timers.”

“But we thought you were race crew.”

We arrived as things were kicking off, and I was issued my special “race crew” T-shirt. So far so good. I was then told that I should do … absolutely nothing. It was my worst volunteering fear realized. While the other beshirted folks were running around purposefully, handing out bibs and shirts and randomly folding and straightening things, I had no occupation whatsoever. Two runners eventually approached me to ask how many water stops there would be. Of course, I didn’t know.

“But we thought you were race crew? It says so on your shirt.” (Don’t trust the shirt.)

Finally, I was asked to fill in for one of the folks handing out the race tees. Naturally, by this stage many of the sizes people had requested were gone. Most of the runners took it in stride. Some, not so much.

This was going really well so far …

After a short stint with the baked goods (not my forte), I and another volunteer were asked to head over to the official timing van. We were shown two chairs inside the race barrier and informed that our job was to write down every bib number as each runner finished. This was supposed to act as a back-up to the chip timing system. (We discovered later it was actually a back-up back-up.)

“Oh sure,” we said, looking at each other with fear in our eyes. “That sounds fine.” Quick, let’s escape to the beach and hope no one notices.

Because of course you want to trust the outcome of the race to two volunteers who have never done this before. One of whom could fall asleep at any second …

We were stationed on the two chairs to the left of the finish.

We decided that I would write and she would call out the numbers. It was fine at first; the front-runners were helpful and put big gaps between themselves as they brought the run home. But it wasn’t long before the frenzy began. It must have been hilarious for anyone watching to see me frantically trying to write down numbers in order while my cohort tried desperately to get a visual on each of the runners as they came through, all the while talking loudly enough so I could hear over the cheering and announcer’s voice. “Wait, what? 935? 945? 1235? What? Hold on, there aren’t that many people running, are there? … Wait. What?” 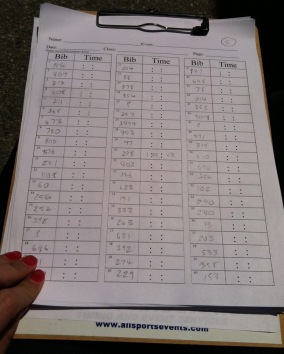 We didn’t catch everyone, but that would have been impossible (especially for newbies like us). And after all, we were just a back-up back-up.

I did gain a new appreciation for why race directors insist that people pin their bibs to their fronts. It was also remarkable how many people crossed the line without any bib at all.

We did have a fantastic vantage point from which to witness the 1000 or so runners (and walkers) up close as they finished: limping, holding hands, high-fiving the crowd, despondent, triumphant, exhausted. It was a brilliant place to be at that moment.

But it was a long, hot job. We were out in the blazing sun for two-and-a-half hours (it was a gorgeous day). When Hubby, who had impressively run the half, came over to say hi, we finally got something to eat (much appreciated pizza slice delivery). But we were effectively abandoned by the rest of the volunteering crew, who I guess had their hands full with baked goods and trash cans. We didn’t get a thank you on the day (but I suppose that’s what the T-shirt is for), although I did get a nice email from the co-ordinator.

So I guess I did get my glimpse behind the race curtain. (I have a wicked sunburn on my arms to prove it.) It was a great experience, and my fellow timer-volunteer was a blast, but I’m not sure I would do it again in a hurry. Unless, of course, I got an intersection and a bright orange vest …

13 responses to “Once upon a timer: My first race as a volunteer”