Last week, despite my race containing many, many hills (on which I will say no more), I somehow managed to get absurdly close to running a 5K in less than 30 minutes. I am partially convinced the race clock was wrong (seriously, if you had seen me trudging along, cursing the asphalt and the trees and the clouds and … well, everything, really … you’d be doubting the veracity of the timing instruments too). But the official results say I was three seconds away from this milestone, so who am I to argue?

Hell, I thought, If I can do that well in the presence of many, many hills, just think what I can do in their absence. In your face, 30 minutes! Next time you see me I’ll be relaxing with a cold one and basking in the post-race glow …

Which brings me to this week’s run, the Boston Marine Corps Honor Run 5K at Carson Beach, No. 19 in my 52 Weeks, 52 Runs challenge.

This run had huge potential. The website said so:

“This is the flattest and fastest course you will find in the Boston area. Perfect for beginner runners or for experienced runners looking for a PR!”

Huge potential. I am not really a beginner, nor am I experienced. Rather, I like to consider myself an experienced beginner. And I was definitely looking for a PR. Perfect …

It was a great day for a road race. Cloudy and cool – my kind of  weather; and I got to visit an area of Boston I had never spent any time in. I was ridiculously early (Mr. I Don’t Arrive Later Than An Hour And A Half Before A Run would have been proud. He was with the National Guard this weekend), so I spent about 45 minutes wandering along the Harborwalk and playing tourist. I attempted a bit of a jogging warm-up but gave up on that idea pretty fast. I didn’t want to tire myself out, after all. Because I’m sure jogging along for five minutes at the equivalent of a walking pace was going to do just that …

Anyway, I snapped a picture of this. 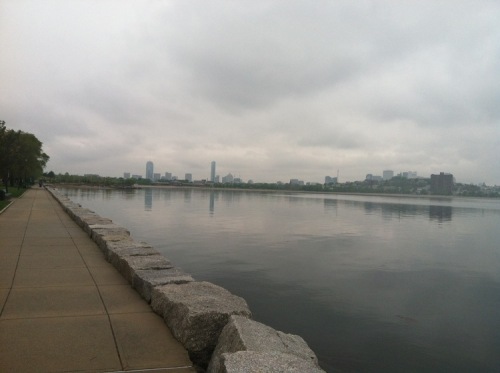 Boston from the Dorchester Harborwalk.The city is a lot closer than it looks. 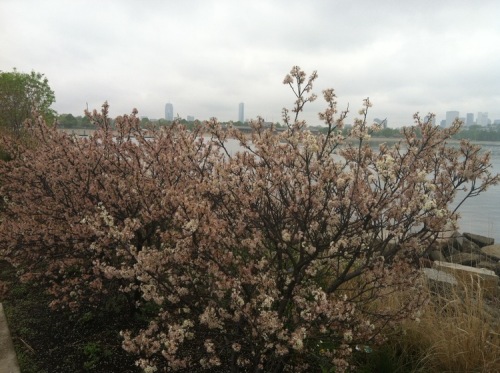 Caught up in my reverie, I almost forgot I was there to do a run. But I was yanked back to reality by a close call with a guy doing a successful variation of the warmup I had previously attempted, and so decided to head to the start.

The gathering of the runners.

I was psyched. This was going to be it, the moment I cracked the elusive 30. (Admittedly, this goal only became a goal about three weeks ago, when I realized it might actually be achievable. Before that, I would have snorted coffee out of my nose if you had even mentioned it.)

I started speedily (for me), hovering at just under a 10-minute mile (the GPS watch is genius). I tried to pick up the pace then dropped back; then cranked it up again and dropped back. I didn’t feel fabulous, but then again I rarely do. But I was on track.

Then … disaster. I got the mother of all stitches (I think I drank too much water too fast right before the run). I tried everything I could to get it to stop stabbing me in the side, but the bastard wouldn’t relent. So I walked. And ran. And walked again. Eventually I was able to get back into a groove, but by then it was too late and I saw Mr. Thirty Minutes pass me by with a cheeky grin on his face.

I still have no idea how I managed to run so fast last week with hills. Even if I had been at my best on this run, I’d still be hard-pressed to come up with that time again, let alone surpass it. Does this mean – I can’t believe I’m saying this – I need hills? To be explored …

Despite my lack of skills, the Honor Run was a fabulous event. It’s held in cooperation with the Semper Fi Society and the Marine Corps Law Enforcement Foundation. According to the website, the foundation has awarded more than $40 million in scholarships and bonds to children of Marine Corps and law enforcement officers killed in the line of duty. The run aims to raise awareness for this work and to recognize the sacrifices of men and women in uniform.

Now that is an honorable goal. It was my pleasure to contribute.

Nineteen weeks down, 33 to go. It’s a long, leafy road ahead.