I lived in Canada for eight years, so I know from cold. But not once during my time in the Great White North did I think it was appropriate to stand around outside in sub-zero weather wearing tights and no parka. Waiting last weekend for the Cambridge 5K Yulefest to start, I had a moment of clarity. It was along the lines of “You’ve proved your point. Now go back to bed.”

Of course, I didn’t do that. I mean, I was in the tights already.

The masses come out of their huddle to walk to the start of the Cambridge 5K Yulefest in Harvard Square. And yes, that is a giant gingerbread man.

About 800 hardy souls turned out for this event, which was in support of Cambridge Family & Children’s Services. I was surprised at the numbers, considering the chill factor, but then I remembered we had been promised beer. 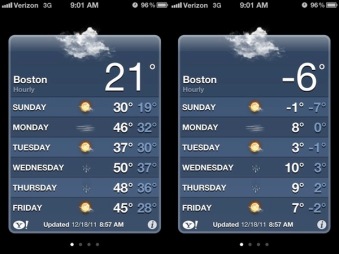 While we stood around waiting for the run to start, I formulated many murderous thoughts. But I also had a revelation (actually a few): This makes me totally hard core!
I can endure anything now! Mother Nature, you are my bitch!

Of course, then I remembered that in each of my gloves was an LL Bean Wicked Good Hand Warmer (these things are amazing, by the way); my sneakers contained toe-warming equivalents; and I was still wearing my good, completely-inappropriate-for-physical-activity cashmere scarf because I hadn’t been able to bring myself to take it off on the walk over. So my bravado dissipated somewhat. And I was still freezing.

Despite the presence of the toe warmers, I wasn’t able to feel my feet for the first five minutes of the 5K. I knew I was moving, as the buildings were (very) slowly going past, but it was an odd sensation. Or lack thereof.

Eventually, the blood started flowing and I heated up quickly. I’ve decided that organizers need to put volunteers along the side of the road during these frosty runs so you can shed items of clothing as you get warmer. Needless to say, my good, completely-inappropriate-for-physical-activity cashmere scarf became a giant (but stylishly purple!) pain in the neck. Thankfully, I was able to hand it off to my Hubby-shaped running cheer squad over the last half-mile.

Unburdened by my toasty noose, you’d think I would have picked up the pace. But no. I was done. It was a slightly tougher run than the week before (read: hillier), and we both posted inferior times. I think it’s OK to blame the weather.

Beaten by an ostrich

Festive runs often call for participants to dress up. Maybe it’s supposed to provide distraction from the fact that you got up at 7am to run for 35 minutes in a meat locker. (Not sure what happens in February, when all those red and white socks with the fluffy tops get retired.) I am not a costume person (unless it’s a mandatory Santa suit), but I admire those who make the effort. In this case, my admiration was directed at the guy who not only came dressed as an ostrich, he came dressed as an ostrich wearing shorts! He also beat me. I mean, that’s not hard. But still, respect. 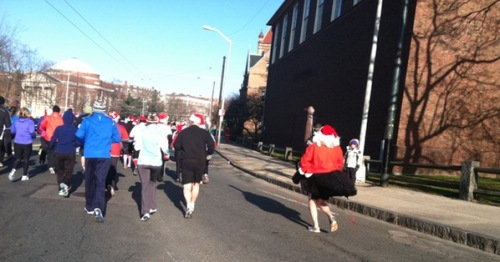 In a shocking twist, we didn’t stay for the Yulefest beer party at the end. It was just too cold. Good for keeping the ale frosty; not so good for the fingers. (The organizers have promised a warm tent for next year.)

2 responses to “It’s brisk! (And I don’t mean my pace): Cambridge 5K Yulefest”