My preparations for this run have been what some might call “erratic” and others might term “crap.” I had good intentions, but an unscheduled trip home to Australia knocked me off course and I haven’t quite managed to get back on. So I decided to just “train” at my own speed rather than sweat the fact I’m not doing pickups every Monday and hill repeats every Thursday. I won’t be fast when I finally run my half, but I’ll finish it eventually. Maybe. Probably.

When the Mad Marathon and Mad Half in the Mad River Valley, Vt., announced a walkers division (genius!), we thought it would be a good experiment. If I can walk a  half-marathon, then my running time should be faster. Right? (This statement may fall under the category of “famous last words.”) 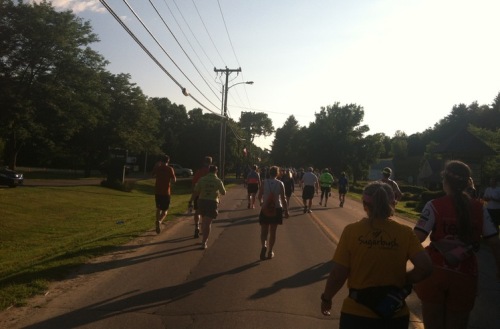 At the back from the start. The pack has already pulled way ahead.

I was looking forward to not having the pressure of running hanging over my head at the Mad event. On this day, I was among a select group of people who had chosen dignity over beet-face. We weren’t allowed to so much as think about running or we’d be unceremoniously deposited among the speedy folk and left to fend for ourselves. I was going to be at the back of the pack, but it was by design, so I was down with it.