SeaWheeze 2013 recap, aka, I’m not nearly color co-ordinated enough for this run

In August last year, I arrived at the Lululemon SeaWheeze Half Marathon in Vancouver, British Columbia, with 30 or so races under my belt thanks to my 52 Weeks, 52 Runs challenge. So, even though I hadn’t exactly “trained” for SeaWheeze 2012 (faithful readers will recall my general crapness at sticking to any kind of training regimen), I felt prepared in an at-least-I’m-not-completely-out-of-shape-and-at-least-I-look-the-part kind of way.

One of the free yoga classes SeaWheeze put on the day before the run. The weather was beyond gorgeous. Look at that sky!

Fast-forward to last weekend. I had been looking forward to SeaWheeze 2013 for a number of reasons. 1) You get cute (but teeny) shorts in the mail to train in. (Ha!) 2) You get to hang out in Vancouver in the middle of summer, which is lovely, even if for one weekend the city looks as though Lululemon threw up all over it. 3) You get to shop in the exclusive SeaWheeze store, which is fun if damaging to the wallet (good thing we did the entire trip on points), and you end up with clothing in colors you may not have considered in the past: namely, orange. 4) You get free stuff like massages and yoga classes. (OK, so unlike Hubby, I didn’t avail myself of either, but I could have.) 5. And you get to go to the half-marathon after-party/concert, which this year was in Stanley Park and featured Xavier Rudd (I have no idea who that is, but apparently he’s Australian and kind of a big deal). 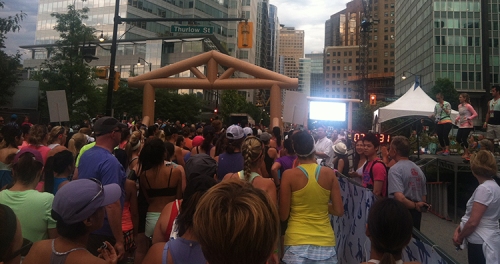 The SeaWheeze 2013 start. I was in the too-far-back-to-care-about wave, which, as usual, meant no speakers, so we had no idea what was going on until we finally got to the front (40 minutes later). At least we got a countdown and a Mexican wave this year.

So, it won’t surprise anyone to learn that I wasn’t in shape for this race. I think I made peace with that fact about 30 minutes after I decided to throw myself into training (SeaWheeze puts out a very cool TackleBox schedule for runners) while I was at home in Australia. (I got bored.) I do better with racing-as-training. Hubby is the same way. I also wasn’t nearly as snappily dressed as I could/should have been. I forgot this run doubles as a giant advertisement for Lulu. I’m surprised they don’t funnel those of us not in the current season’s colors and styles to another event entirely. Or kick us out of the city.

END_OF_DOCUMENT_TOKEN_TO_BE_REPLACED

“Jogging is very beneficial. It’s good for your legs and your feet. It’s also very good for the ground. It makes it feel needed.”  ~Charles Schulz

Comments Off on Quick quote