A note to all the compression-socks-wearing, tank-top-and-shorts-sporting, giant-GPS-watch-bearing runners who started way too far back in the pack at the B.A.A. 5K in Boston on the weekend. We know you’re awesome. You know you’re awesome. How about giving those of us who aren’t so awesome a break and not crashing into us as you speed through a 6,000-strong crowd of runners (a moveable beast?) in a misguided attempt to get to the front. Did you spend too much time at Starbucks and forget that the race started at 8am? Or maybe you just wanted the rest of us to see your awesomeness in action. In which case, mission accomplished. This is exactly why compression socks give me the fear.

Now that I’ve gotten that off my chest, here’s a photo. 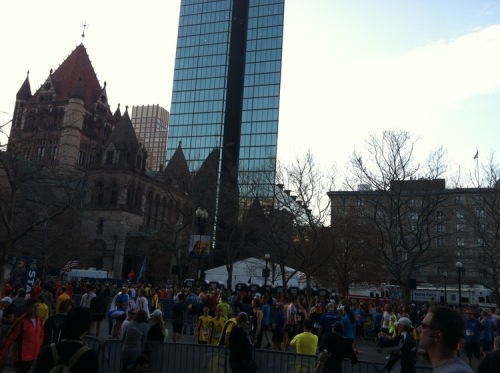 Crowds gather in the shadow of a couple of Boston landmarks (Trinity Church and the John Hancock Tower) for the B.A.A. 5K.

I always try to find the joy in this running lark. Otherwise what’s the point? But this weekend’s 5K was packed with folks who take the pastime seriously. Very seriously. Which is fine, of course. I am full of admiration, awe, respect, etc., for people who can a) run a marathon; b) run the Boston Marathon; and c) run the Boston Marathon in extreme heat, which is what I know many of the 5Kers were doing the day after this run. So, go ahead, take running as seriously as you like. But do it from the front of the pack.

Wait, am I ranting again? Here’s another photo. 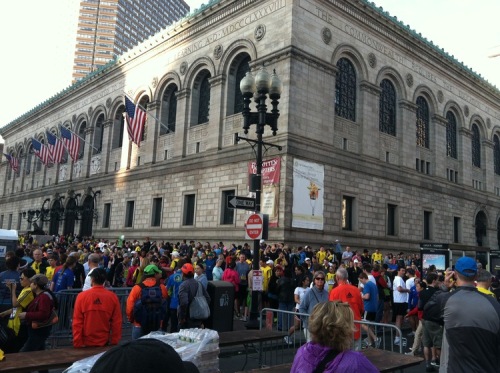 I guess I shouldn’t have expected anything different from a 5K put on by the Boston Athletic Association (B.A.A.), which hosts the world’s oldest and most prestigious marathon. If ever there were going to be a collection of uber-runners in one place, it was this weekend in Boston.

There was a benefit, though. This run was fast. Really fast. 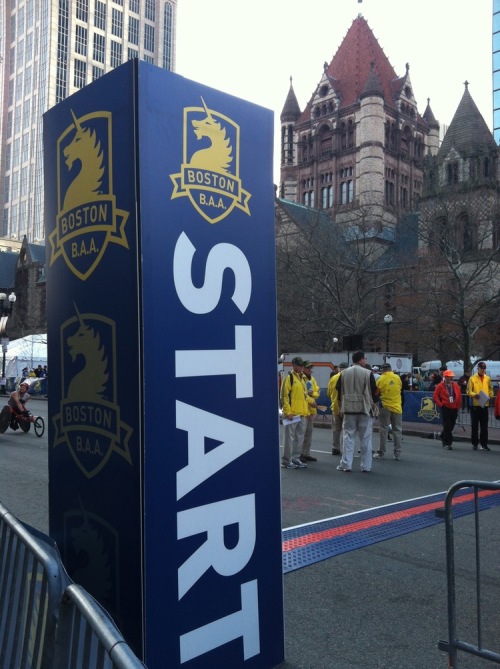 It felt speedy from the start. The reason I knew this was because I looked down at my new watch (it’s small, so that’s OK) and saw that I was running a consistent 9.40 pace. Which is unheard of for me. Unheard of.

Did I mention how much I love knowing my pace?

There was a hill in my way, of course. And then another. My dreams of doing a sub-30 5K were dashed as soon as I hit those dang inclines. But I still managed to PR, shaving a few seconds off the time I set at the Charlotte Motor Speedway.

I guess those uber-runners helped propel me to my best time yet. But I stand by my rant …

After the run, I met up with a couple of girls from my office who had also done the 5K, one of whom had just run her first. As this was a non-Hubby weekend (he was drilling with the Guard), it was great to not be alone. Better to be red-faced and sweaty among others in the same situation than walking the streets solo in that state. 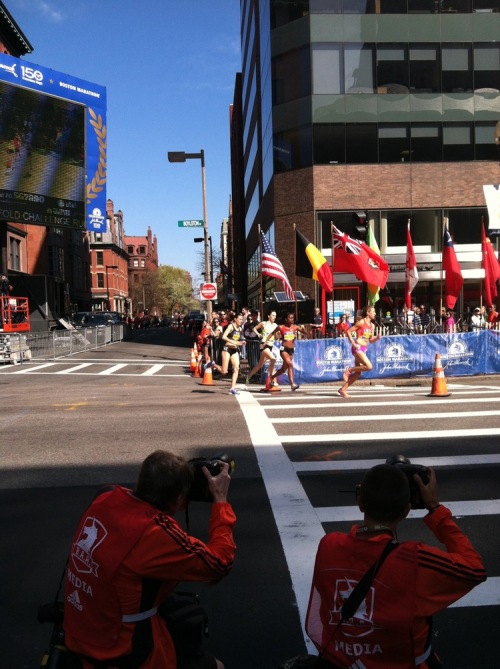 Elite women do a single mile in a ridiculous time.

I also stuck around long enough to watch the elite men and women do the one-mile invitational. Man, those are some uber-uber-runners. 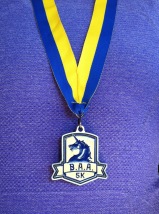 The men’s division was won by an Aussie, which made me even more annoyed that there was no Australian flag up on the finish stretch. The New Zealanders got one, but not the Aussies. For shame. Oh well, at least I got a medal. Wait, I’m liking these now?

Sixteen runs down, 36 to go, it’s a long, very serious road ahead.

The event: B.A.A. 5K
The location: Boston, MA
The date: April 15, 2012
My time: 31.03 (pace 10.00)
The cause: Dana Farber Cancer Insitute
The T-shirt: Yellow Adidas short-sleeved shirt with black stripes
The aftermath: A goodie bag with a bagel, fruit cup, Powerade, Power Bar and a can of fizzy grape