Despite the absence of official beer, I had high hopes for last weekend’s 5K run, the Old Fashioned 10 Miler and Flat 5K in Foxboro, MA. This was primarily due to the distinct lack of hills. Or sand. Or sand in hill form. Glee! 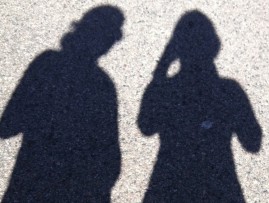 Our shadows waiting for the starting gun.

Hills and I have a long, troubled history, and sand is a recent addition to the list of things that give me the fear, so I wasn’t at all upset that they both decided to make themselves scarce. Add to the mix some brilliant weather (if this is winter then I’m a marathoner), and the fact I had a running buddy who shares the same pace as me, and things were looking up.

With the blazing sun at our backs, Running Buddy and I started off strong … Probably too strong … Definitely too strong (when I say “strong,” I mean a 10.20 pace. It’s all relative, of course). We were going great guns until mile marker No. 2 loomed (when I say “great guns,” I mean me wheezing like a cat with a hairball, and taking my inhaler more than I would have thought necessary. But still, we didn’t stop).

But back to that mile marker …

Once we hit that ominous “2” sign, I think the aforementioned great guns decided to shoot us in the foot, and we both pulled up to a walk. We were pooped from all that strong. I’m not sure what we would have done had we not known there were still 1.1 miles left, but at this point we were both thinking: “THERE’S STILL 1.1 MILES LEFT?!!”

I know, I know, I shouldn’t be so defeated after a mere two miles. I mean, I’ve been doing this for a while now. It gives me plenty of joy (I wouldn’t do it if it didn’t), but I wish it wasn’t so dang hard. My running buddy and I both talked after the run about how we would love it if this came naturally to us. Part of it (for me, anyway) is a lack of training motivation, part of it is physical limitation. But I’d love to really love it.

Watching the 10-milers come through the finish. The weather was truly remarkable.

Needless to say, we ran/walked the rest of the way. I’d liked to have finished stronger, but I think my endurance gave up somewhere between the water table and the mile-two sign and decided to hitch a ride home.

I think I say this every time, but I have to start doing some proper training. (I’m starting a new job this week, which may account for some of my distraction.)

Because it’s not nearly as good without beer … 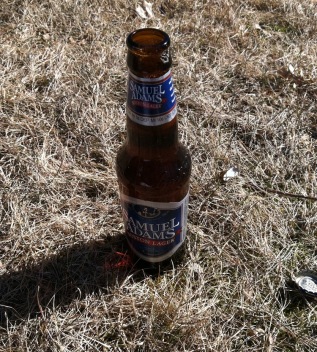 I mentioned at the top of the post that there was no “official” beer at this race. Well, we weren’t going to let that stop us. My excellent running buddy brought along a couple of bottles of ale for us to enjoy al fresco after all our hard work (!). Genius.

We discreetly imbibed on the grass while the sweaty 10-milers finished. Who had the better plan?

While I was proving how much I suck, Hubby was running the Half at the Hamptons in New Hampshire, his second half-marathon of the year. As I attempt to do 52 runs in 52 weeks, he’s doing 12 half-marathons, as well as running with me as often as he can. Can you spell “crazy.” Anyway, he rocked it and came in at 1.44.11. Pretty great considering he’s also a running newbie.

The event: Old Fashioned 10 Miler and Flat 5K
The location: Foxboro, MA
The date: February 19 , 2012
My time: 34.26
Hubby’s time: See above
The cause: This run didn’t support a charity, but Half at the Hamptons supported local food pantries , so that’s our charity for the week
The T-shirt: Short-sleeved tech shirt with OFTM logo
The aftermath: Lawn beer!