This was a momentous Turkey Day – for reasons that had nothing to do with Pilgrims and very little to do with turkey. Rather, Thanksgiving 2011 occasioned my running the Feaster Five in Andover, Massachusetts, which was not only my first 5K since early October but my inaugural attempt to run in the big chill. It was also my first time playing human dodgem.

This was a big run.

The start of the Feaster Five. At this point, half the runners had already crossed the start line (the banner in the distance). It took me a full six minutes to get there.

For a novice like me who has thus far dabbled in warm-weather races of a few hundred people, it was quite something to be among the 10,000 or so folks – clad in sweaters, gloves, beanies and, in some cases, hats shaped like turkeys (disturbing) – who had gathered on this gorgeous but frigid morning.

I was nervous about the cold. Though my hatred of heat is well documented, the chilly air has been known to wreak havoc on my asthmatic lungs (which of course is why I choose to live in New England).

Beaster of a Feaster

These hats give me the heebie-jeebies.

I read recently that starting out strong leads to a better overall time than conserving energy at the outset (my usual technique). So I took off at a good trot and was feeling great until about three minutes in there loomed my nemesis. No, not a  runner in a giant turkey hat, but a really big hill.

Trying to contain my scowling lest I be caught on film (it has happened), I ran about halfway then stopped in disgust and walked with a heavy heart (actually, that may have been a heavy chest; I couldn’t figure out if what I was feeling was indigestion or if it was my refrigerated lungs telling me: “Get us the hell out of here!”).

With the hill beaten, if not vanquished, I continued on my way and happily embraced the descent that followed, although I secretly fumed about what the beastly rise had done to my time.

Part of the challenge – and the fun – I discovered, in a race such as this is manoeuvring around the many, many runners, and kids, and runners with strollers, and dogs that have joined you on your jaunt. It’s tough to keep pace when you’re continually on the lookout for a Jack Russell you might squish. I managed to get through the run with only a few cases of bodily contact (not all of them my fault), and no tripping, so I was rather proud.

But what about the finish?

I decided to run the last mile flat out and see if I could shave a minute or so off my time, so I eased into a slightly faster pace. Feeling puffed and getting redder by the second (yes, my friends, still red, despite the weather), I rounded a corner and saw a banner in the distance that I assumed was the finish line, so I kicked it up a notch and gave it all I had …

But no. Banner fakeout! 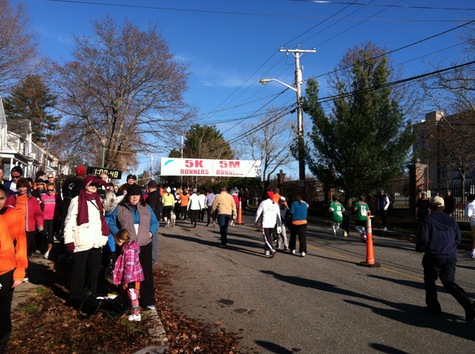 The non-finish-line banner that led me astray.

It was a sign pointing out that 5K runners were to keep to the left and 5-milers to the right. Now, giving my all usually means there’s nothing left, so by the time I got to this faux finish, I couldn’t run any farther. I trudged the rest of the way (did I mention there was another hill?),  running the last 50 meters or so only for the benefit of the camera guy.

Don’t get me wrong, this was an amazing run. There’s plenty more to tell, but I feel like this is sliding into essay territory, so more later. I’m sure my avid readers (!) are dying to know how the fancy tights performed.

What’s up with the pie?

Ah yes. Appropriately, given that it was Thanksgiving, there was apple pie handed out at the end. I’m not talking slices, but whole pies, courtesy of Table Talk Pies in Worcester. I know I have spoken about the merits of post-race beer, but post-race pie has got to come in a close second. The first race that combines them will have a record number on its hands.

The event: Feaster Five Thanksgiving Day Race
The location: Andover, MA
The date: November 24, 2011
My time: 36.53 (damn hill and rogue banner!)
Hubby’s time: 36.27 (he ran the 5 mile, so this is impressive)
The T-shirt: Orange long-sleeved technical shirt
The aftermath: Pie, bananas, something called Supercandy, which turned out to be pretty tasty (it’s good for you, too, apparently)