Since I started running last year, I’ve packed in a lot of races. So many, in fact, that you’d think one thing would be painfully obvious to me by now: There. Will. Be. Hills. I figure the fact that hills continue to elicit from me such breathless rage either means I have some unresolved hill-related issues from my past or I really need to take an anger-management course.

Looking back through some of my recent posts, I’ve noticed a pervasive “hills = evil” theme. And while they are evil, all this complaining has made me concerned that I’m turning into Stride and Killjoy.

To that end, I have decided to issue a moratorium on hilly rants. Although, this doesn’t apply if a hill is a) unnaturally steep or b) occurs at a particularly inopportune place in a run, such as right at the freaking end. Which brings me to this week’s event, the Lake George Half Marathon and 5K, No. 18 in my 52 Weeks, 52 Runs challenge. 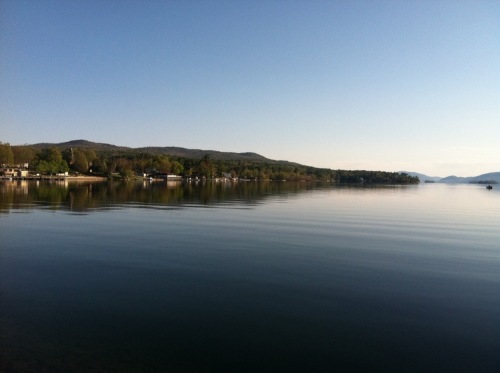 I love how the most idyllic settings have produced, for me, some of the most challenging runs. Salisbury Beach, MA; Riverside Park in NYC, the covered bridge in Henniker, NH, and, now, Lake George, NY. 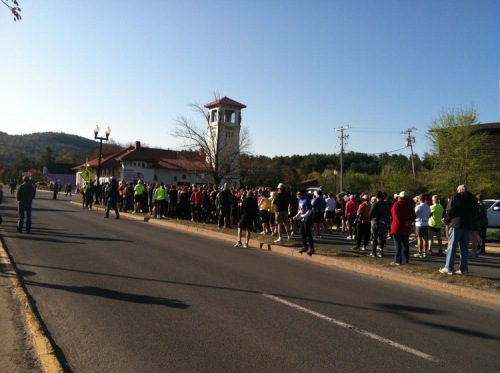 Half-marathoners brave the chilly start while the 5Kers look on.

This was another small-ish event, which was nice after the insanity of the B.A.A. 5K. I enjoy the buzzy atmosphere of the big races, but there’s something to be said for the chill nature of the smaller ones. These are my people.

Only 75 runners chose to do the 5K; the rest of the 500 or so participants took on the half-marathon. I remember the first time I ran in such a small group. I was convinced, convinced I would come last. It was nice to not have that fear this time around, although I was far from confident. That is a running state I’ll never achieve. 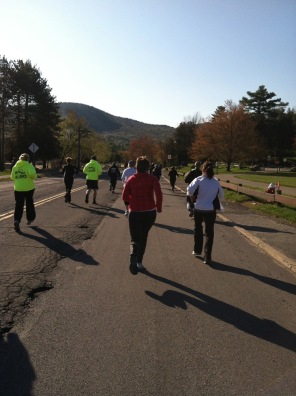 Guess I'll never get any faster if I insist on taking photos in the middle of a run.

No train, no gain

The first mile of the Lake George 5K was torture. There was no particular reason other than it was cold. I busted out my inhaler mid-run for the first time in months. Crap. Clearly my training wasn’t working.

In the midst of trying to figure out the perfect running/cross-training schedule, I’ve forgotten to actually, you know, train. I am determined to right this wrong. I’m not so foolish to attempt to run a half-marathon on the back of no preparation at all, despite what Barney Stinson tells me …

This race produced a number of those moments where I wondered why the heck I was insisting upon torturing myself. Every weekend. At my own expense. My lungs weren’t working and I felt like swearing at people. Had there been any onlookers, I may well have done just that. (I thought it was probably not such a great idea to swear at other runners; they are wiry but strong.) 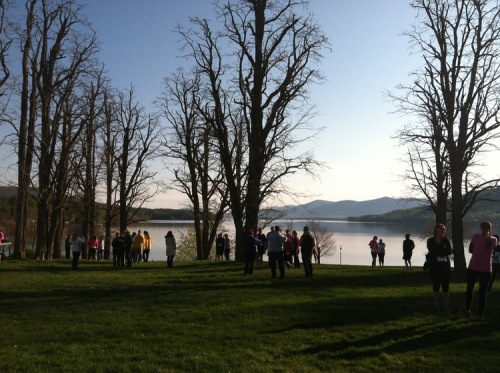 Waiting for the half-marathoners to come in.

Mile two and three were equally as painful but with lovely views of the lake and surrounds. And yes, there were some hills. [Insert standard hill rant here.]

Savvy readers will note that last on week’s disaster I added about three minutes to my 5K time (yes, I talk like this now. And yes, I know you can have bad runs, but three minutes seems like a lot). In the midst of my pain this week, I was convinced I had regressed even further and was going to completely mangle my time curve. 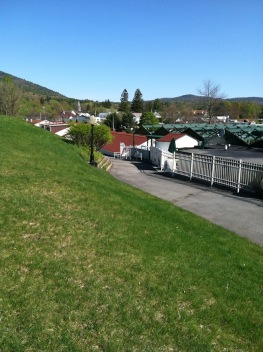 Rising to the occasion. The hill leading to the finish line.

I was especially convinced of this when I turned a corner expecting to galumph towards the finish only to find ANOTHER hill lurking between me and sweet relief. (This is where rule b. above comes into play.) I think I may have heard laughter from the direction of the race organizers.

That’s all I am going to say on the topic. Until next time, of course …

As usual, the event itself had little to do with me feeling as though I had just been whomped in the chest with a baseball bat. The gloriously sunny skies lent a happy air to the whole affair, and the chill eventually diminished enough that I was able to stay outside and watch the band and eat bananas as I waited for Hubby to finish the half-marathon. 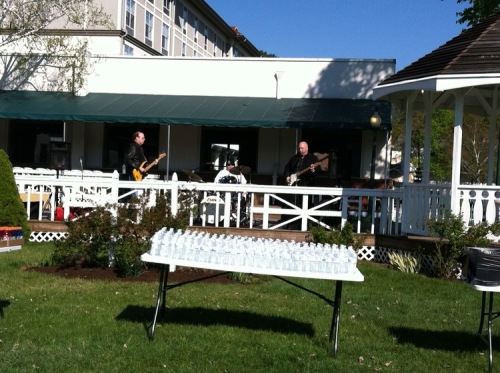 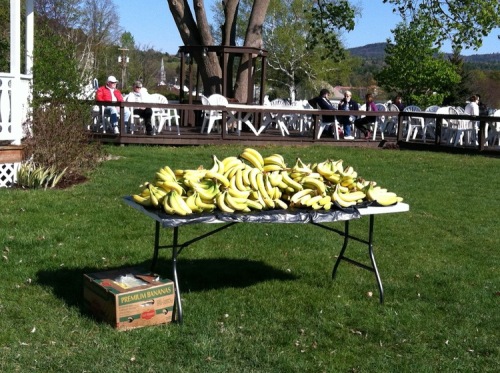 We have some bananas.

Strangely enough, despite lumbering through the run in a slightly crazed fashion, I managed to post a PR. Don’t ask me how. I guess in those moments where I was actually running, I was running pretty fast (for me). I’m going to have to start declaring to anyone who will listen that I am on the run/walk training program to improve my speed. It sounds better than saying I am being forced to walk because my lungs are two big spongy wimps.

Eighteen runs down, 34 to go. It’s a long, winding road ahead.