I have discovered something worse than hills. And treadmills.

There was a dearth of organized runs this past weekend, but I am committed to my 52 Weeks, 52 Runs plan. Rather than take to the treadmill again (savvy readers will recall how well that turned out), I decided to invoke yet another made-up rule:

4. If I’m traveling and no runs exist, and I don’t have a gym to go to, I can as a last resort huff and puff on my own.

Sure, I’m not traveling, and I certainly have a gym, but it’s my challenge and I can bend the rules if I want to. So Hubby and I decreed that we’d huff and puff on our own. Specifically, we decided to run/walk the Quincy Half Marathon route (he’s running this race for real in March) and donate $25 to the American Cancer Society Daffodil Days program. 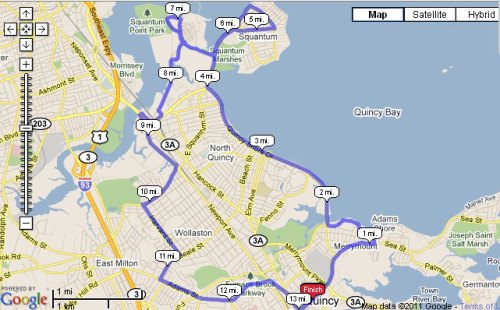 I was down with this plan, although at one point I said to my running buddy: “You do realize this is going to take HOURS!”

Must be something in the air

We started our run at the Quincy YMCA (the plan was to run the first 5K then run/walk the rest). I should point out that the day looked gorgeously bright, and felt unseasonably warm in the sun.

As I started moving, a diabolical wind came at me out of nowhere. It had clearly been waiting for the right moment to strike. As it whacked me in the face, I’m sure I heard a breezy “bwahahaha.”

I struggled from the outset. Each inhalation was a groan (I normally gasp for air in this fashion at the end of a run, but never at the start). I couldn’t find my rhythm. That evil, unrelenting breeze sucked (or rather blew) the energy right out of me. It was a mighty foe. 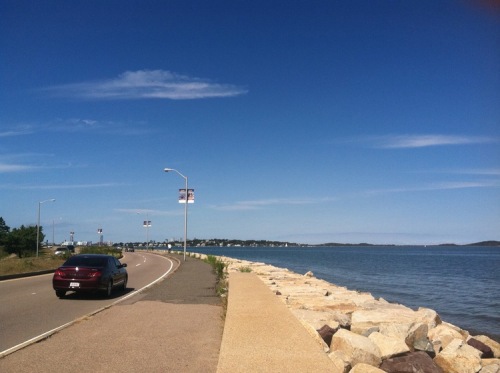 Our run took us along Wollaston Beach in Quincy, MA. I'm cheating a bit; this photo is not from that infamous day, but the sky looked almost the same.

At one point I stopped, which is something I would never do on a “proper” 5K. Hubby did his best to keep me going, but I felt like I had hitched a Delorean ride back to the Before Time, when I couldn’t jog for two minutes without collapsing in a wheezy heap.

I would normally be encouraged by the long, flat stretch along Quincy Shore Drive, which is picturesque, and contains my house, but the headwind was particularly belligerent and I had no comeback.

I was running against the wind, but I felt neither young nor strong. 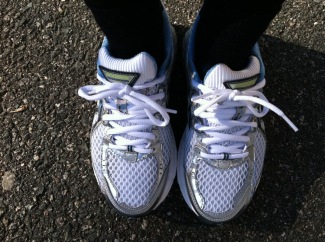 Not even my new Brooks kicks could salvage this run. More on them in a future post.

Here’s what happened next …

1. I made it to the end of the 5K, but it was so windy and nasty that I almost cried, especially when I saw my time. If I had wanted to cry, I would have watched a sad movie from the comfort of my sofa. No tights required.

2. I decided there was NO way I could run/walk/skulk/plod/trudge any farther along the half-marathon course. A detour to deposit me at home was in order.

3. We reached the house and realized that the key I had so cleverly tucked into my water bottle pouch was the wrong one. We were locked out. My dreams of a post-run beer were dashed.

4. Leaving me behind to hang out on the stairs without beer, Hubby – who still had plenty of run left in him – took off back towards the YMCA, where we had parked our car at the start of this disaster (keys inside).

5. Forty-five minutes later, Mr. Peppy Runner returned to liberate me from my stairwell freezer. It was enough time to make me realize I need to do a lot more training if I ever want to conquer hilly, windy adversaries.

The event: Quincy 5K Disaster
The location: Quincy, MA
The date: January 29, 2012
My time: 37:18
Hubby’s time: 37:18 (we ran together)
The aftermath: Chicken burger at B.Good
The cause: American Cancer Society Daffodil Days program

I’m still working on the results of my playlist experiment. I want to get at least two decent runs in before I come to any conclusions (and clearly my last two have been far from decent). So stay tuned …