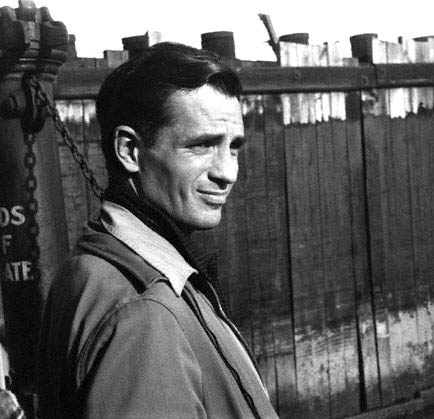 Author Jack Kerouac (he ran with us in spirit).

Where boobs characterized weekend 5K part one, part two was all about beer. (And you wonder why we chose to run both.) Some would probably point out that I’m taking a far-too-lowbrow view of the Jack Kerouac 5K in Lowell, MA, but having read the author’s  classic novel and gotten little out of it, I chose to focus on the event’s post-race libations rather than its high-falutin’ literary pedigree. (Lowell, by the way, is Kerouac’s hometown and where he is buried.)

It wasn’t our first run with beer at the end, but it was our first that started and ended in a pub – Hookslide Kelly’s – which made me infinitely happy. I’m not sure of the health ramifications of post-race ale, but, hell, it’s not like we were drinking before the run.

You could tell from the start this was going to be a fast race: I shudder when I see lots of people in compression socks. But what puts the fear into me (and especially Hubby) even more is the fast old men (FOM). Every race has them, but at this one they were present in spades.

Is it wrong for me to get joy out of overtaking an 80-year-old? He was the only FOM I was able to beat.

Avid readers (!) will recall me whining about how this race was supposed to be hilly, so I had spent the morning doing mental preparations; in this case, they consisted of deciding that I wasn’t going to run at all. I would be smart and trade my customary shuffle for an amble. Ha, Take that, cranberry-face!

I was so prepared for this run to be “challenging” (I have come to fear that word) that I must have talked myself into it. There was a decent hill at the first half-mile, but the rest was pretty good, although the sun was blistering. I walked a decent way, but it was at a good clip. In the end, it didn’t feel quite as bad as the day before. Yet somehow, I managed to post EXACTLY the same time. Come on, it was our second race of the weekend!